Domenicali: Too early to make predictions 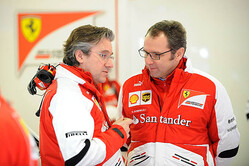 In addition to strong pace the Ferraris showed good reliability, between them Fernando Alonso and Kimi Raikkonen completing 252 laps.

"These were four very demanding and important days to give us something to work on over the coming days," he told the team website. "The technical parameters of the F14 T, as well as the aerodynamic validation we saw on track, match our expectations and provide a solid starting point, which we must now exploit as much as possible.

"In Jerez, we concentrated our efforts on fine tuning the new systems to ensure that all the components that make up the new power unit were working as well as possible and the team was focused on its tasks. I was also very pleased to see, even if was hardly a surprise, how our drivers worked in harmony and that they have already provided excellent feedback relating to the development of the car."

While Red Bull's chances are already being written off, certainly in the opening races, following a disastrous opening test, Domenicali refuses to get carried away.

"We can't evaluate performance levels at the moment, neither that of the F14 T, nor those of our rivals," he said. "The important thing is to do as many laps as possible to give our engineers the data they need to continue with the development of the car.

"It would be premature to make any precise evaluations," he insisted. "What counts for more is to have clear ideas on what we must do now and on the direction to take, so that we arrive in Melbourne in the best possible shape."

Despite an overall positive test, many, including Bernie Ecclestone, are still perturbed by the disaster that was the opening day where various technical issues severely compromised the track action. While some fear that reliability issues could dominate the opening rounds of the season, the Ferrari boss believes the raft of rule changes will ultimately benefit the sport.

"We are definitely on the eve of a new era in this sport," he said. "As usual when there are such radical changes, it's best not to rush to make any premature judgement and in our opinion, the new technologies are really fascinating. They also represent a challenge which Ferrari, as a car constructor, has welcomed because of the technology transfer it will ensure across all activities of our company."

While it has lost Toro Rosso to Renault, Ferrari now has Marussia in addition to Sauber as a customer team in 2014.