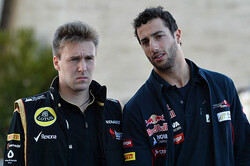 Clearly frustrated at his treatment by Lotus, Davide Valsecchi has hit out at the Enstone outfit admitting that he is now targeting a move to IndyCar.

The 2012 GP2 champion spent much of 2013 kicking his heels; other than replacing an unwell Kimi Raikkonen on the penultimate day of pre-season testing, promotional runs and one day of the Silverstone Young Driver Test, that was just about it. Indeed, when Raikkonen eventually left the team to seek (ahem) medical attention for his back, Valsecchi - allegedly the Enstone outfit's test and reserve driver - was overlooked in favour of Heikki Kovalainen, who was under contract to Caterham.

Though he subsequently said Lotus had made the correct decision, he now appears to have had a change of heart. Admitting that he doesn't expect to remain at Lotus he has revealed that he has been contacted by the team's out-going CEO Patrick Louis.

Asked by F1Passion.it what he thinks Louis wants to see him about, Valsecchi admitted: "I really don't know. Maybe he wants to wish me a happy new year, or tell me that they have hired Sorensen, or that he is resigning.

"I don't have expectations," he continued, "we'll certainly have a good chat. If they were to offer me a job like that of last year - not to race - then I'd prefer to stay at home and help with my father's company. I'm not interested in Formula One just to comment about it on TV. I prefer to race."

Refusing to deny media claims that, like Raikkonen, he has not been paid by Lotus for his services, Valsecchi admitted that he is now looking to a career in IndyCar.

"I have no news regarding my commitment to the sport at the moment," he said. "If someone were to call me to race without asking me for money, I'd be ready to do it right away, but I'm not too worried about the situation. And I won't stop exerting myself to have a steering wheel in hand soon.

"In the meantime, I don't hide my desire to get into IndyCar. There is someone who gave me a hand, although in the US I'm not as famous as here in Europe, where my achievements in GP2 are well known."