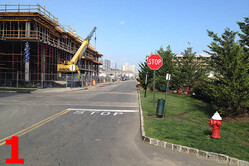 F1 supremo Bernie Ecclestone has admitted that although on the provisional calendar, neither New Jersey or Mexico is likely to be on the 2014 calendar when it is finalised next month.

"I would doubt whether it's going to happen," he told Reuters ahead of today's Abu Dhabi Grand Prix when asked about New Jersey.

Asked about Mexico, he replied "definitely not," before quickly correcting himself and adding: "Probably not".

While Mexico was always up against it, the circuit requiring a massive upgrade in a very short period of time, the news of New Jersey comes as no surprise, certainly not to those who looked at the proper picture.

Despite wild claims from the team behind the event, and sections of the media eager to swallow and distribute those claims, the fact is that the race - as we know it - was never going to happen.

Despite coming up with the minimal funding required to get the event on the provisional calendar organisers have come nowhere near finding the $100m plus needed for the event to actually take place... and that's ignoring the impracticality of the street track being proposed.