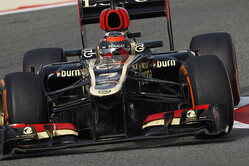 Kimi Raikkonen ended the first day of practice for the Abu Dhabi Grand Prix with the fourth fastest time of the day at the Yas Marina Circuit; racking up the joint-highest number of laps completed in the process [65 across the two sessions]. Romain Grosjean was fastest in the first session, but had a brake and then a vibration issue in the second session to end the day twelfth fastest.

Kimi ran with the team's original, shorter wheelbase specification whilst Romain ran with the later, longer wheelbase specification. Kimi ran trouble-free throughout both sessions enabling a variety of set-up permutations to be evaluated, whilst Romain missed track time in the second session due to an issue first with his brakes, then with vibration. Pirelli's medium [white] tyre was used in the first session, the medium and soft [yellow] compound in the second session [both held in the afternoon]. The E21 demonstrated strong potential using both tyre compounds in both long and short configuration.

Kimi Raikkonen: "The car feels okay and we had a pretty normal Friday. The shorter chassis feels okay here, but I didn't drive it back to back with the longer one so it's difficult to say which is better. We're still trying to get rid of some understeer, but on this circuit it feels better so far. As always, there are some improvements we can make to the car so let's see what happens tomorrow."

Romain Grosjean: "It's been a pretty good day even if we missed time in the later session whilst the brakes were worked on. We also had a little vibration that needed looking at, but it wasn't the end of the world. The car feels pretty good as we saw with the fastest time in the first session, so I'm sure we'll get on top of everything we need to for tomorrow."

Alan Permane, Trackside Operations Director: "As always in Abu Dhabi, we saw two very different sessions on Friday; the first taking place in daylight with very high track temperatures, the second in much more representative evening temperatures which is what we'll see for qualifying and the race. We completed limited setup work in FP1 - focusing on setting ride heights rather than car balance - then used FP2 to complete our normal evaluations of the two tyre compounds. Unfortunately Romain had a brake disc failure which lost him some track time, and there was a small vibration when he returned to the track so we cut his day short in order to fully investigate this issue. Kimi meanwhile had a good day and looks competitive on both tyres. He wanted to try the short wheelbase car again as he felt its characteristics would suit this circuit. So far it all looks good and this configuration will be kept on his car for the remainder of the weekend. His long-run pace looks very encouraging on both tyres."