Most expensive donuts... ever 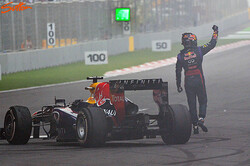 At the end of today's Indian Grand Prix, rather than heading to parc ferme, the German drove down the pit straight and stopped in front of the main grandstand. After performing a number of (perfect) donuts the 26-year-old climbed from his car, kissed the tarmac and then headed towards the crowd, throwing his gloves to the thousands out out-stretched hands.

However, all this is contrary to the regulations and it was feared the race stewards would take action... which they did.

The fact that Vettel “failed to proceed directly from the circuit to the post race parc ferme without unnecessary delay." a breach of Article 43.3 of the FIA Formula One Sporting Regulations, earned the German driver a reprimand, though the stewards, due to the special circumstances accepted the his explanation.

However, for failing to instruct Vettel sufficiently to return directly to post race parc ferme, Red Bull was fined 25,000 euros.