Massa sets out his stall 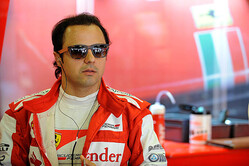 Just five races from the end of his time with Ferrari, Felipe Massa is seeking a drive for 2014 insisting that his experience will benefit teams as new rules are introduced.

The popular Brazilian, who famously was world champion for 38.9s back in 2008, is currently being linked with Lotus and Williams. Speaking ahead of this weekend's Japanese Grand Prix at Suzuka, says he feels he can still win races, which, of course, would do his job search no harm at all.

"It's a dream but anything is possible," said the 11-time winner. "Anything is possible in this job: how many times have we seen a guy win a race without being in the best car. You never give up hope and I will try to get one more victory."

However, the Brazilian insists that a twelfth win isn't vital to make him attractive to prospective employers, citing a 186 race career stretching back to 2002.

"I think my experience matters more," he said. "Everyone knows what I can bring to a team, especially at a time when everything will start from zero with new rules and I think I can bring a lot to a team."

Looking ahead to the season finale, his home race, and the circuit at which he 'won' the title back in 2008, he said: "It's always very emotional for a Brazilian, but even more so in your last race for Ferrari. I hope I can have a great race and a great result, but before then, I hope we can go well in all these last races."

Though he has yet to secure a 2014 driver, Massa, who has warned his teammate not to expect any favours in the remaining races, warned his rivals that he will be no pushover as the season winds down.

"I will take an aggressive approach." he said. "I did that in the last race, but unfortunately it didn't pay off as I spun. But you need to take risks and I will keep trying."

Looking ahead to the new formula, while some are concerned at the driver weight fiasco, the little Brazilian is more worried by the prospect that the need to save fuel could turn races into an 'economy run'.

"Yes, it could be very frustrating to have to save fuel," he said. "Everything will be different, from the way you have to drive, the way you race and manage the car and how you use the fuel. I just hope it can be interesting to watch for the spectators and viewers and that it can also be interesting for the drivers. But we shouldn't complain about something before we know how it's going to be."