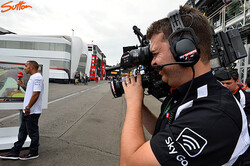 When it came to light in summer 2011 that subscription service Sky Sports would take over the live broadcasts rights in the UK to Formula One from 2012 there was uproar. Fans were outraged at having to pay to watch F1 for the first time and some teams were worried that the reduction in viewers could damage their sponsorship rates.

Two years down the line and the teams must be thanking their lucky stars because as, Pitpass' business editor Christian Sylt reveals in the Daily Telegraph, the Sky deal helped to boost F1's profits by 24% to a record Ł262.3m last year. As Sylt also points out in US motoring magazine Autoweek, this gave the teams more prize money than ever before as they took home a massive Ł462.4m in 2012. As can often be the case, it looks like the only real losers were the fans.

F1's largest shareholder, the private equity firm CVC, certainly didn't lose out as it took home a dividend of Ł532m from cash in the bank and the proceeds of a loan refinancing during 2012.

Accounts due to be lodged with Companies House this week show that revenues rose 12% to Ł840m at Delta 2, the highest-level F1 parent company which files publicly available financial statements. Costs increased 7% to Ł577.7m leaving Ł262.3m of earnings before interest, tax, depreciation and amortisation (EBITDA).

Despite repeated complaints that the teams aren't paid enough, the amount they received last year increased 8% on 2011 and was 202% higher than in 2007 when they only got a percentage of the income from broadcast fees rather than a cut of F1's profits. Although the prize money is not distributed evenly between the teams, the top ten each get a basic fixed payment and this alone came to Ł17.2m in 2012.

The prize money payment is F1's biggest single cost. It even exceeds the Ł65.3m in bank interest paid by Delta 2 last year on the Ł1.4bn of debt used by CVC, to buy the business in a leveraged buyout in 2006. However, despite the large size of the prize money payment, F1 is insulated against risk as the amount reduces if its profits go down. The main exception to this is that the top three teams, Ferrari, McLaren and Red Bull Racing, have the right to pull out if operating profits fall below Ł440m. Last year they hit Ł725.7m so there seems to be little chance that F1's biggest stars will leave the sport.

The vast majority of Delta 2's revenue comes from fees paid to host and televise F1 races. The accounts state that "despite the continued effects of the downturn, growth was noted in a number of the Group's income streams. Underpinning the performance were... the benefits of revised TV rights arrangements in the UK."

Sky is one of the highest-paying broadcasters and its fee for the live rights to all F1 races, practice and qualifying sessions comes to an estimated Ł44.3m annually. It took over the rights from the BBC and is believed to be paying 10% more than its predecessor. The BBC now only broadcasts nine of the races live but pays an estimated Ł20.3m annually giving Delta 2 two bites of the cherry in the UK.

The companies responsible for F1's two other main business areas of trackside advertising and corporate hospitality are based in Jersey so do not file publicly available accounts. It is understood that they generated a combined Ł246m last year taking F1's combined turnover to $1.6bn.

Revenue in 2012 was also boosted by the return of two races which gave a total of 20 on the calendar and made it the biggest since the championship began in 1950. Last year saw the addition of The United States Grand Prix after a five year hiatus and the return of the race in Bahrain which was cancelled in 2011 due to the civil uprising in the country.

Again, it is another development which some teams voiced concerns about at the time but on reflection they must be thanking their lucky stars that it went ahead.

Hindsight's a wonderful thing, isn't it?