Under the bright lights of the Marina Bay circuit in Singapore the teams encountered the polar opposite of the demands of the last round at Monza.

This high downforce configuration street circuit puts huge demands on both the cars and drivers as they struggle to overcome the heat. Several revisions have been made to the track to improve safety with the largest coming in the form of an altered turn 10.

Dubbed the Singapore Sling, the chicane that used to reside at T10 was replaced by a simple left-hander, much to the delight of the many drivers who have been airborne through there over the last few years.

Simulations ahead of the Grand Prix by the teams was seeing an increase in apex speeds of around 40kmh, this would help to lower lap times by at least a second and help to get the race distance under the designated two hours.

Having demonstrated the flexibility of the RB9 over the course of the season already it's no surprise the team is only needing to make minor changes in order to repeat its performance advantage.

As we can see the team returned to using the Hammerhead configuration nose (with the FOM cameras either side of the nose tip) and a high angle of attack rear wing that requires a monkey seat to make the wing operate effectively.

Meanwhile we can see the team has reverted to its use of the cascade elements on the front wing to condition the airflow around the front wheels. However, they have omitted the small vertical strakes on the upper element of the wing that had been used in the proceeding GPs to compliment the rearward ones. 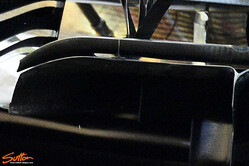 At the rear of the car more work has been done to extract performance from the diffuser with the perforated/detached Gurney flap extending around the periphery of the diffuser.

Still chasing development, Ferrari took a number of upgrades to Singapore to try and maximise the F138's chances around the street circuit. Only enough parts were available for one driver to run all the upgraded components however and so, naturally, Fernando Alonso had these installed on his car.

The team could be seen back-to-back testing the components throughout FP1 and FP2 using flo-vis and Pitot tube arrays to see if what CFD and wind tunnel had been reporting was the same at the track. 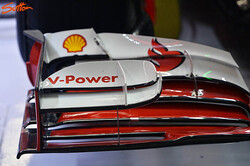 At the front of the car the team revised the front wing (Alonso) making both the perforated mainplane and flapped sections full length rather than the half-distance they usually span.

This should create downforce over a much a wider section of the wing than the previous iteration. The leading edge endplate blade was also deleted whilst the top flap is trimmed down to counter balance the increase in downforce/drag.

Underneath the nose we find the team utilising two different sets of turning vanes, pictured are the three-element vanes used on Alonso's car to take advantage of the new wing. Massa retained the two element turning vanes along with the regular specification front wing. 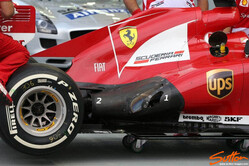 With cooling being an issue around this circuit the team opened up bodywork around the exhaust (1), with a cut out placed alongside the exhaust itself to allow the temperature to dissipate.

Furthermore the cooling exits aft of the exhaust bodywork that lead towards the suspension (2) feature a Gurney trim to further enhance heat/airflow extraction.

Both cars were treated to new rear brake ducts, as we can see from the inset picture, the older configuration had three slots on the top edge whilst the new one features just one. Furthermore an additional horizontal vane protrudes out of the duct to leverage more downforce. 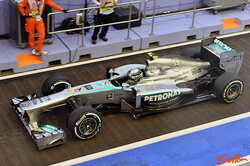 Returning to a higher downforce configuration the team has applied pretty much the same specification we saw it run in Hungary. The most obvious signs of this is the return of the rearward 'R' cascade perched over the upper flaps and meeting with the endplate, whilst the rear wing features the smaller tyre wake slots.

Having been dealt the blow of losing Kimi Raikkonen ahead of this race and having its long wheelbase version of the E21 rebuffed by the FIA, the team could be seen to be a little on the back foot (The LWB E21 will now feature for Lotus at Korea onwards).

Much like Mercedes it returned to the high downforce circuit of Singapore with a specification reminiscent of Hungary albeit with more cooling opened up to cope with the temperature demands. 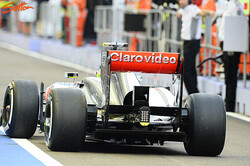 With development all but switched to 2014, the team is still trying to make the most of what small developments it has and utilise any track specific ones that were already in its plans.

A revised beam wing was used in Singapore with an arced central portion used to compliment the monkey seat and extract more downforce.

The Woking team also toyed with the amount of vortex generators used above the sidepod, trialling four during the free practice sessions.

The use of three or four vortex generators is marginal as the space they occupy remains the same, the effect they generate therefore is speed dependant. The sidepod like any surface on the car works better within a certain operating window, the vortex generators expand this window.

More however is not always better and the team decided to return to three vortex generators above each sidepod inlet for qualifying and the race.

Learn more about Matt and check out his previous features, here