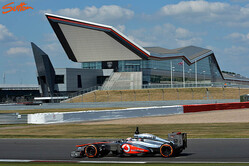 Ten days ago Pitpass' business editor Christian Sylt revealed that the search for a new owner of Silverstone had finally come to an end after four years. In an article entitled 'Silverstone changes hands' we reported that Silverstone is under new ownership after a senior BRDC member told Sylt that "a deal has been done on Silverstone. I don't know who bought it and I don't know what the terms are but it is absolutely categoric that a deal has been done and not due to be announced until next month probably." Sylt then spoke to Formula One's boss Bernie Ecclestone who confirmed the news and revealed that he was soon due to meet the new owners. We are now closer to finding out who they are.

The details come from Sky News' business editor Mark Kleinman who occasionally covers F1 and is known for his repeated 'exclusive' reports several years ago that Rupert Murdoch's News Corporation was planning to buy F1. Other gems included claims that former M&S boss Stuart Rose "has been informally sounded out about a senior role at the helm of Formula One motor racing" and that Singaporean wealth fund Temasek was "being courted to buy a stake in Formula One." None of this ever happened though Sky did end up becoming F1's broadcaster in the UK and in its first race a complaint from its production team reportedly led to one of Kleinman's articles being taken down for 40 hours. Whilst his reports about the finances of F1 have often failed to come to pass Kleinman does seem to have at least one good source at Silverstone.

In late 2010 he reported that the corporate finance arm of accountancy firm Pricewaterhouse Coopers (PWC) was preparing an information memorandum about investment in Silverstone to be circulated among high net worth people, property groups, private equity firms and other prospective investors. This was indeed issued in February 2011 and the BRDC, along with its legal advisers Norton Rose and PWC, then evaluated a number of bids.

According to a letter written by BRDC chairman Stuart Rolt in the summer of 2011, the evaluation was based on a range of criteria including: the lump sum and rent payable to BRDC; the investment proposed to be made in the site, including infrastructure and the vision for the circuit's business with regard to maintaining the future of Silverstone as the home of the British Grand Prix; the protection of the rights and benefits and the long term security of the BRDC; creating a centre of excellence for training and education within the British motorsports industry; developing Silverstone in a manner consistent with its primary function as a motor racing venue; ability to fulfil the financial commitments to the BRDC, major event promoters and the planned investment in the site; and understanding and adherence to the Members' Charter.

There is good reason why it has taken a further two years to find a buyer. As F1 sports reporter Kevin Garside pointed out in a follow up to Sylt's report about the sale, "across Formula One's new frontier in places like China, Singapore, Abu Dhabi, Korea and India races are subsidised by governments willing to pay Bernie's price for a weekend of positive global exposure. Silverstone has none of that. It stands or falls as a commercial enterprise using a deck stacked in favour of the rights holder, who banks dough from all angles across the weekend, from everything, in fact, other than the turnstiles."

In a nutshell, the British Grand Prix barely covers its running costs and fee paid to host the race. The BRDC's most recent accounts are for the year-ending 31 December 2011 and they show that it made a Ł4.5m net loss on revenue of Ł55.8m. Contributing to this were interest payments of Ł842,000 on Ł26.1m of net debt which was accrued to fund construction of a new pit and paddock complex. The BRDC wants to use the proceeds from an investor to clear the debt and as a lot of it came from Lloyds it would make a lot of sense if the bank is connected to the takeover of the circuit.

This is where Kleinman's report comes in as he claims that Lloyds' private equity division Lloyds Development Capital (LDC) "will invest millions of pounds in backing a management buyout of Silverstone Circuits, the entity which promotes and hosts the British Grand Prix, while MEPC, a property group owned by the BT pension fund, will acquire the development land around the site."

LDC has of course been involved with F1 before through owning a stake in Marussia which it sold earlier this year as Sylt revealed and Kleinman points out in his report. It remains to be seen what the BRDC members would think of a deal involving Silverstone being sold to the management who got the circuit into the situation which led to it needing to be rescued.

In response to a story about the MEPC talks in June a spokesman for the BRDC said: "[The BRDC] can confirm that it remains in discussion with parties interested in investing in Silverstone. Those discussions are progressing. Under the terms of non-disclosure agreements, the BRDC is not able to comment on any details or speculation surrounding potential investors." Although we know that the circuit has been sold there is certainly speculation over who has bought it so there are still a few laps to go before we find out who has become Silverstone's new owner.

In other news, and talking of sources at Silverstone, which former director of the BRDC has had his membership suspended for two years after committing the outrageous crime of allowing two guests in over the Grand Prix weekend without signing them in?