Ecclestone successor to come from outside F1 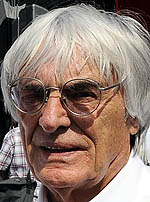 There is no doubt that Ecclestone is a fighter and he has fended off numerous challenges over more than 30 years in F1’s driving seat. Although he owns just 5.3% of F1 Ecclestone has managed to stay in complete control of the sport. He has the full support of the private equity firm CVC which controls F1 and has kept him in control despite the charges against him.

Time is harder to keep at bay and age will eventually catch up with him, though that may well be in the distant future. Ecclestone’s father and mother died at the ripe old ages of 87 and 89 respectively so he may be around for some time to come.

It is widely thought that Red Bull Racing team principal Christian Horner will eventually take over from Ecclestone but this rumour has been blown out of the water by an article in the Daily Telegraph by Pitpass’ business editor Christian Sylt.

Speaking to Sylt, a senior source at CVC confirmed that if it is still in control of F1 when Ecclestone moves on it will replace him with someone from outside the sport.

“The business is too small to have a successor lurking in the ranks. The successor almost certainly has to come from externally,” says the source.

F1 only has 313 staff and 10 senior management with no deputy or chief operating officer waiting to take over the driving seat. In 2011 David Campbell, the former European chief executive of entertainment group AEG, was hired to run F1’s corporate hospitality division. He was tipped as a successor for Ecclestone until Sylt revealed in March last year that he had parted ways with F1.

Other names from outside the sport who have been tipped as replacements include Sainsbury’s chief executive Justin King and former Marks & Spencer boss Sir Stuart Rose.

Last year it came to light that CVC’s preparation for the planned flotation of F1 on the Singapore Stock Exchange has included hiring head hunting agency Egon Zehnder. It drafted a short list of potential replacements for Ecclestone which reportedly includes Richard Scudamore, chief executive of football’s Premier League.

CVC bought a 47.2% stake in F1 in 2006 from state-owned German bank BayernLB and soon afterwards Ecclestone and his Bambino family trust paid Ł28.6m to its chief risk officer Gerhard Gribkowsky.

German prosecutors believe that Ecclestone paid the money to Gribkowsky to steer the sale of F1 to CVC as it had agreed to retain him as boss of the sport. They claim that selling to CVC reduced the value of the bank’s stake as other buyers could have paid more.

Ecclestone denies this and says that Gribkowsky threatened to make false allegations about his tax affairs to H.M. Revenue & Customs if the money was not paid.

It isn’t the only legal case which Ecclestone is involved with. He is also facing a civil suit in London’s High Court from German media company Constantin Medien which claims that it lost out on a profit share agreement from the sale of F1 because it was worth more than CVC paid. US investment firm Bluewaters Communications is also suing Ecclestone in the New York Supreme Court as it claims that it offered 10% more than CVC but was rebuffed by Gribkowsky as he had been bribed.

In June last year a court in Germany found Gribkowsky guilty of receiving a bribe and sentenced him to eight and a half years in prison. Ecclestone was charged last week with paying the alleged bribe but, as Pitpass has reported, this does not automatically mean that he will go to court. A German judge now has six weeks to decide whether to bring him to trial.

Gribkowsky is the star witness for the prosecution but Ecclestone’s lawyers claim he is discredited as he is a convicted criminal and has changed his testimony several times. Gribkowsky initially claimed that he received the payment for consultancy work but he switched to a guilty plea which is understood to have reduced his sentence.

His lawyer Sven Thomas told Sylt that “the defence will file a comprehensive submission with the Regional Court. The main topic of the submission is the challenge of the different ‘confessions’ of Dr. Gribkowsky.”

Following the news that Ecclestone had been charged CVC released a statement saying that “Mr Ecclestone, CEO of the Formula One Group has now received a bill of indictment, in English, from the Munich Regional Court. Mr Ecclestone has 6 weeks to provide a response to this bill of indictment, prior to a decision being made by the Court on opening proceedings. The Board will continue to monitor developments in this situation accordingly.”

The CVC source adds that “clearly our actions show that we support Bernie.” His contract was signed on 24 March 2006 and it gives him a Ł2.5m annual salary. It was for “an initial fixed term of three years and thereafter continuing unless or until terminated by either party giving to the other 12 months’ written notice.”

Last year Ecclestone’s contract was updated to clarify restrictions which would be imposed for the first 12 months if it is terminated. They include not being allowed to “work for or help any manufacturer,...induce or seek to induce any officer, consultant or employee of any Group Company who earns more than Ł100,000 per year or... work for or help to establish a competitor to any company in the Group.”

The source adds “the reality is that Bernie runs the business and he is much closer to what is going on than we are. We are obviously important in the sense that we are the shareholders but we don’t run the business on a day to day basis.”

The question on everyone's lips is who will be doing this after Ecclestone is gone and we are now one step closer to knowing the answer.