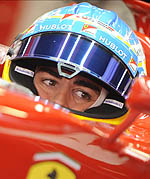 Stefano Domenicali: "Given the current state of play, I think today's result is the most we could have achieved and I don't think the strategy had much of an influence on the outcome of the race. Wanting to see the glass as half full, the points we have picked up at this point in the season are very important. The variable temperatures we saw today produced different performance levels. This turnaround confirms yet again how difficult it is for everyone to interpret as well as possible the true competitiveness of the car-tyre package at every track. Looking ahead, now it is vital that we optimise the performance of our car, just as our rivals have managed to do, because we want to get back to fighting for the top places as soon as possible. In Hungary we will have different tyres and it will be important to understand their behaviour right from the test at Silverstone, in two weeks time. At the same time, we will try to change pace on our development work, an area where we need to push hard."

Fernando Alonso: "This was a difficult race, we weren't very quick and at some moments we were not competitive enough. In the first stint, we paid the price for being on used tyres, because by lap twelve they were already finished, which cost us some of the advantage we hoped to gain from our strategic choice. Even if we were hoping to finish on the podium, finishing less than eight seconds off Vettel after starting eighth is an encouraging result. The team is doing its utmost to make the car more competitive and after tackling a few races without being too sure about our updates, today we can claim to have cleared up many of our doubts and to have understood which are the areas we must concentrate on to move the development forward. When we arrived here on Thursday, the Silverstone test did not seem that important, because the race drivers were only meant to be testing the tyres, but having heard what the FIA had to say, it's been confirmed that we can test updates and this makes it a much more sensible proposition. If I get the call from the team, I'm ready to go."

Felipe Massa: "I am very disappointed with what happened, especially after the rest of the weekend had gone well. At the start of lap four, when I was on the straight, at the moment when I braked, the rear wheels locked up and I couldn't stop the car from spinning. When the car came to a stop, it was stuck in fifth gear and I couldn't stop the engine from stalling. It's very odd that it got stuck like that, even if so far, the team has not seen anything unusual. The Mediums did not have the pace we expected after Friday's free practice, but maybe other factors, such as the higher temperatures, came into play and made the difference. Now I want to focus on the next race when I plan to do my utmost to turn things around."

Pat Fry: "Today's temperatures and track conditions, different to those we saw over the past days, had a strong influence on the performance of the various teams. In our case, I don't think the final result would have been different if we had opted for the opposite strategy, because, starting from fifth or sixth on the Softs, our position in the end would have been the same. Our pace on the soft compound was better than expected, when one considers that it's particularly sensitive to the higher temperatures, while the degradation of the Mediums was higher than expected and caused us a few more problems in balancing the car and that spoilt our first stint. I am sorry for Felipe, who had made another great start, but unfortunately he locked up the rear wheels under braking and spun, possibly because of the lack of grip. Fernando managed to get the most out of the car, always trying to attack when possible. It was a shame to miss out on the podium in the end, especially as the speed of the Red Bulls and Lotuses was not that much higher than ours. Now there are two weeks before the next round in Hungary, during which we will be pushing as hard as possible to close the performance gap which separates us from the leaders."