Montezemolo: In Todt we trust 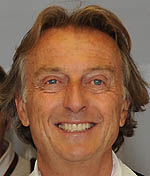 Luca di Montezemolo says he has total faith in the FIA ahead of its International Tribunal in relation to the Mercedes test at Barcelona with Pirelli.

As the Ferrari president addressed a press conference at the company's Maranello HQ, to mark the opening of the new Museo Ferrari, the was something almost Machiavellian about the situation. After all, this was the Ferrari president urging the FIA, now under the leadership of his former team boss Jean Todt, to "pursue" Mercedes, now led by the Italian outfit's former technical director Ross Brawn. Todt and Brawn having guided the team to countless titles.

But as we know, sentiment doesn't cut it in F1, so no surprises that di Montezemolo wants to see the full weight of the law come down on the ‘guilty’.

"We have faith in the FIA," he told the assemble guests and media. "I do not wish to comment, but I note with satisfaction that the Federation is following this incident well.

"Let's hope Formula 1 can maintain its professionalism and we have faith that those who attempt to circumvent the regulations are pursued and prosecuted," he added, before appearing to correct himself, "or rather more prosecuted than pursued."

Looking ahead to the current season, he said: "We know exactly what we must do to win. Between today and tomorrow, I will hold a long and detailed meeting with Domenicali and all the engineers: they know what we must do to improve and I am convinced that right to the very last race, Ferrari will be competitive and a contender, that we will not give up and that we have all the elements in place to improve.

"A super-Saturday?" he continued. "Yes, but even just a normal one would do: it would be enough to see a car capable of getting comfortably onto the first two rows of the grid, not necessarily on pole, because from there, we can win the race. On Sunday, we saw Alonso produce another amazing race, with Ferrari running as a contender. We can but hope that in future, it might be a bit hotter on the race weekends…"