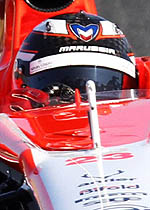 For the past three months there have been rumours aplenty about teams which were looking for new investors and others which were reportedly on the verge of closure. Despite all this chatter no deals have been done. Until now.

Writing in the Daily Telegraph, Pitpass' business editor Christian Sylt reveals that government-owned bank Lloyds has sold its 25.3% stake in the Marussia F1 team to Marussia, the Russian sports car manufacturer which the outfit is named after. It gives Marussia 92.7% of the shares since the remaining 7.3% is owned by current and former management of the team.

Lloyds Development Capital (LDC), the bank's private equity division, bought its stake in 2009 for an estimated Ł10m and its spokesperson told Sylt that "LDC has sold its minority shareholding in the Marussia F1 team to Marussia. Whilst the details will remain undisclosed, the terms of the transaction will enable LDC to recoup the full value of its investment in the business." In itself this is impressive given Marussia's poor performance both on and off track.

The Banbury-based team joined F1 in 2010 but has yet to score a single point. Its drivers are Frenchman Jules Bianchi and Max Chilton, son of Grahame Chilton, the chairman of reinsurer Aon Benfield.

Marussia lies tenth in the standings and the latest accounts of its parent company, Manor Holdco, show that in the year-ending 31 December 2011 it made a net loss of Ł46.3m on revenue which reversed 5% to Ł28.6m.

The LDC spokesperson confirmed that it will continue to provide debt to the team and its chief executive Darryl Eales will become a non-executive director. On 12 April Eales and Carl Wormald, the head of LDC's Manchester office, resigned from the board of the team following the sale.

It was no secret that shares in the team were up for grabs. In October last year, Sylt revealed that, according to the team's chief executive Andy Webb, its directors were in "active discussions with potential new investors in the business."

Two months earlier, speculation was rife that Chilton senior had invested in the team and on one website it was claimed that "as far as I understand G Chilton has recently bought out the shareholding in Marussia which LDC previously owned and have been looking to dump for over a year." The website set this straight but it clearly never occurred to it that it would be best to wait for the Manor Holdco company records to see who really owns the team. Earlier this month, Grahame Chilton told Reuters "I haven't invested in the team" and we now know who the buyer really was.

It may be that Marussia's purchase was backed by external investors but there is absolutely no evidence that this is what happened.

What we can say with more confidence is that the revelation about the sale to Marussia suggests that the team's "discussions with potential new investors" have not yet borne fruit. This is of course because Marussia is not a new investor in the team.

It indicates that F1's high-octane budgets may be putting off investors.

At the end of last year the Spanish HRT team closed its doors after a funding shortfall and several other teams are still understood to be looking for investment. Toro Rosso, the sister team to three-time champions Red Bull Racing, even failed to attract interest when it was put up for sale. Its owner, the energy drinks company Red Bull, took it off the market at the end of 2011 and one wonders how long it will be prepared to back the team if its performance doesn't improve.

So, although the latest sale may initially seem to show that F1 teams are once again attractive targets for external investors, in fact, the opposite may be the case.