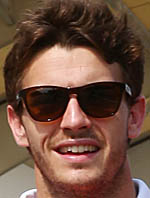 The opening day of running for the Formula 1 UBS Chinese Grand Prix got underway in pleasant and therefore slightly warmer conditions than is the norm at the Shanghai International Circuit. The early progress of the Marussia F1 Team was similarly pleasing, with Jules Bianchi and Max Chilton ending the morning in 19th and 20th places respectively, just behind the Sauber of Gutierrez.

With the benefit of new suspension components and revised front and rear brake ducts, the Team embarked on its programme of circuit familiarisation and aerodynamic evaluations, working with the prime Pirelli PZero Medium compound tyre. There was a planned restructuring of the way the Team works through the FP1 session, taking into account the tyre degradation challenges posed by the first two races of the season.

This afternoon, all of those findings were fed back into the FP2 programme, which began with an initial set-up run, an exploration of the Soft compound tyre and then some longer run race-oriented work. Unfortunately for Max Chilton, after just four laps his session was curtailed by an engine protection 'kill' cutting his engine on track and he was forced to pull over. The car was returned to the garage promptly and Max's car crew worked at a frenetic pace to turn the car around and put him back on track with 10 minutes of the session remaining. A short time later he was forced to pull over once again, the problem clearly unresolved. For Jules, a more positive afternoon session to end the day in 19th place.

Jules Bianchi: "It has been a good day today and it is very pleasing to see clear progress since the first two races, not just in terms of the results, but the way we have revised our working methods to ensure we get the best out of the package. It seemed a long time since I was last in the car but straight away I can feel the benefit of the development work which has been carried out in the break, so this is a nice feeling as we know we have to keep pushing hard in the early part of the season in particular. This morning the track was very dirty and it was quite difficult in places, but it wasn't so long before I was up to speed and by the end of the day the conditions were improving. Generally a good day and I am happy so far."

Max Chilton: "For a day that started so positively this morning, it is disappointing to have suffered such a setback in the afternoon session. This morning I was really pleased with the car balance and I could feel the benefit of the updates we have here. I was less than a tenth from Jules after FP1 and feeling that we had a nice rhythm going for FP2. Unfortunately that was short-lived as I'd completed just four laps before the engine cut to protect itself and I had to pull over on track. I have to pay credit to the guys for turning the car around so quickly to try to get me out again. Clearly we hadn't quite got the full measure of the problem, but it was a great effort nonetheless. Tomorrow will be quite a challenge so a big night ahead with the engineers comparing data and doing everything we can to hit the ground running for FP3 ready for qualifying."

John Booth, Team Principal: "Definitely a day of mixed emotions. This morning, we were pleased to see that with a revised run programme we managed to get the best out of the tyres and this enabled both drivers to get up to speed with the circuit quickly and the engineers to get some good early data on the Medium tyre. Both drivers identified similar balance problems after FP1 and the set-ups were tuned for FP2 accordingly. Jules was able to get the most out of his FP2 programme and developed the set-up further in the session, getting a good mix of qualifying and race fuel running completed. Overall we were particularly pleased with his progress and that of the car in the session and the development parts we have brought appear to be working well. With Max I'm afraid we had a less than ideal FP2 session. We have to apologise to Max as he has missed some very valuable running this afternoon after such a positive start this morning. Unfortunately it looks like we have had an engine issue which was killed by a protection strategy in the first run and whilst we believed we had fixed the issue at the end of the session it appears to have re-appeared in what was Max's final run."