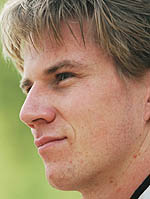 The Australian Grand Prix is cursed for Nico Hulkenberg. In three attempts he has yet to complete a single racing lap, his debut race in 2010 ended after six corners when Kamui Kobayashi collided with the German's Williams.

In 2012, having sat out the previous year, Hulkenberg was caught up in the first corner melee, eliminating him on the spot. This year a fuel tank problem meant he never even took the start. Still, at least he's managed to keep his sense of humour about it.

"My races get shorter and shorter each year," he laughed. "In Germany we have a saying that there's three bad things then it must be over with. I hope this is so!

"It was pretty disappointing," he admitted. "The engineers had a deep look and analysis of what happened (to the fuel tank), both at the circuit and back in Hinwill. They understand the problem, they know what happened."

Sauber Technical Director Matt Morris {url= http://www.pitpass.com/48646-Sauber-explains-Melbourne-fuel-cell-problem}explained to Pitpass that the issue related to a vacuum forming in the fuel tank, causing irreparable damage. "This caused the cell to collapse and subsequently become damaged. Unfortunately, we only spotted this a few hours before the race start, and therefore there was not enough time to make a safe repair."

The news came as a blow to the team, which had shown well during practice. Had he raced Hulkenberg believes he could have run with the Force Indias. "Looking from Friday's data we were pretty close to where (Force India) were," he claimed. "Obviously it's always difficult to tell exactly but I would have expected to fight with them."

With the problem now solved, and processes in place to detect and prevent repeat failures, Hulkenberg can now look forward to a circuit which holds fond memories for him, leaving his Melbourne hex behind. "It's normally a track that's a bit more friendly," he smiled. "I've done two grands prix, scored points in both races and had a good weekend here in A1GP."