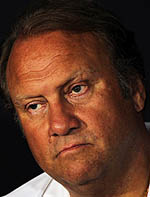 A strong start to the year has come as no surprise to Force India boss Bob Fernley. The Silverstone-based squad managed to get through pre-season with hardly a murmur from the media despite the team's quiet confidence, before leading the Australian Grand Prix.

"There were things that were happening in Barcelona that we could see and people didn't pick up on," Fernley told Pitpass. "I think people didn't see us coming but the signs were there if people bothered to look."

Adrian Sutil led the pack for a number of laps in Australia, following on from last season's Brazilian Grand Prix when Nico Hulkenberg held first place for a period.

The upturn in performance is an indication that things are heading in the right direction, though Fernley warns of the impact 2014 will have on his team as the year progresses.

"I think we can keep going reasonably well, I don't think that's going to be an issue," he claimed. "Like everyone else our thoughts are on 2014 where we're going to have to shift a lot of resources because it's a departure from what we have today.

"I suppose it's like everything else; how quickly do you do it?" he continued. "The stronger start to the season that we can have the quicker that we can look at that opportunity."

Running effectively two design teams the engineering group which will begin looking at next year's car will not be the same as the one which designed the current car. "But eventually we've got to switch everybody over to finish it all off," said Fernley said. "It's a very balanced programme. Andrew Green and Otmar (Szafnauer) I think are doing a super job in operating the factory from that side of it, but next year is going to be a whole different programme."

"The primary design team probably starts on the new car end of this month, beginning to middle of April, but that's just the baselines," he added.