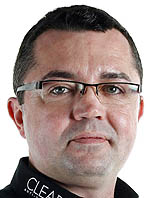 Team Principal Eric Boullier shares his view on winning the first race of the 2013 season, how Kimi Raikkonen has continued building on his strong return to Formula 1 and the plan for the next few races.

Let's start with Melbourne - first race, first win. Did you think the team could do it?
Eric Boullier: After Kimi's start I was secretly hoping that we could be on a podium, but then during the second stint - where we saw the other teams pitting for the second time - showing that they were on a three stop strategy, then I thought 'yes we can do it'. We had decided on a two-stop strategy before the race, even for Romain. Unfortunately, when he got stuck in traffic he changed strategy otherwise we could have had a strong result from both cars.

How confident were you in the team's approach?
EB: You never know what the other teams are planning, but we knew we could make a two stop work - I would not say comfortably - but we knew we could do it. What we were expecting was our pace, our relative pace in the race as well, and it was very good.

What steps has Kimi made over the winter?
EB: Well he's smiling more! Kimi is Kimi, he builds himself up - he had a strong season last year, and he ended it even more strongly than he started. He's starting this season as he finished last year, so he will keep building. I don't think there is anyone on earth who can tell Kimi what to do, so I'm not going to start! It's true that the environment we have in Enstone is different and we encourage everyone to be creative and to be themselves - and that seems much better for everyone. For Kimi we do this as much as possible by limiting what he hates.

Do you feel the win in Melbourne makes Lotus F1 Team title contenders for the 2013 season?
EB: We're just one race in. We clearly stated that we wanted to be one of the top teams this year, and starting the season like this means that we should be able to fight to reach our target, which is finishing third in the Constructors' Championship. I think Lotus F1 Team is truly a top team now. If we can be in the position where we can compete for wins, then that is where we wanted to be. From what we've achieved in the first race we can build on that nice momentum to one day become World Champions again.

Do you think we're facing a season where having the quickest car over a single lap doesn't necessarily mean you'll win the race?
EB: We saw it last year already. In the season a couple of times we caught the leaders in the race because we had a different strategy, or our cars were better on tyres. We worked very hard to make sure that we kept the strengths of last year's E20, and it's true that with the 2013 tyres and the fact that they degrade a little more, has put us in a better position. This said, Melbourne is such a special track that we should wait a bit more before knowing our potential better.

Do you expect the other teams to respond to this?
EB: First of all, we didn't have a normal weekend and I'm not sure that everyone got the chance to put the right set up on their cars - especially for the race. So let's see in Malaysia if we have a normal weekend. That will be the test. I'm sure it's going to be a little bit tougher for us, but I'm sure we'll put in another very strong performance.

What's the plan for Sepang?
EB: We have some new developments, which is good news, and the hot temperature should help us to do an even better job.

Renowned for his way with words, Technical Director James Allison was left - by his own confession - somewhat speechless after a sublime showing from the E21 in Melbourne. However, Formula 1 can be a cruel mistress, with the next venue - Sepang - presenting an entirely different challenge...

You must be rather pleased to see such an imperious performance from the E21 in Melbourne?
James Allison: It was a splendid thing we witnessed at Albert Park. It's days like these, which fill you with complete satisfaction, that makes everything about this job worthwhile and that will be true for everyone involved with the team. We were a little deflated after qualifying as we knew the car had better pace than our grid positions suggested, but every element of the race performance - from Kimi's driving to the strategy and pit stops - came together to create a fantastic team result.

Were you surprised at how well the tyres lasted?
JA: We were confident from the long run pace we'd seen on Friday that we could make a two-stop strategy work, but even so it was hugely satisfying to see the lap times ticking off metronomically without any real fear that the tyres weren't going to go the distance. Despite coming to the end of a long stint, the final moments saw Kimi pulling out fastest laps of the race and it didn't look as though his tyres were dropping off. He wasn't struggling or showboating at the end, he was just running at the pace the car was comfortable with, which is hugely encouraging.

A few niggles in testing coupled with the unpredictability of this year's field made it hard to gauge where we stood heading to Australia; would you now consider the E21 a certified front runner?
JA: I think mechanically we have a strong car. As said repeatedly since the beginning of the season, the annoyances we had in the garages were just that - annoyances - rather than worries. We've clearly shown that by running both drivers - problem free - to the flag. Kimi was full of praise for his car on Sunday night and both drivers showed decent pace at various points in the weekend, but I think if you look at Romain's post-race comments it shows how marginal these things can be. Getting the set up just so and having both driver and car working in harmony is far from a given, so there's no room for complacency at all.

How different is the challenge in Malaysia?
JA: Albert Park is not an average F1 track. It has a lot of similar, medium speed corners, but not very much from the high and low speed ends of the spectrum. Also, the race was conducted in cooler than expected conditions. When it is cool, tyre wear is dominated by graining. We were able to make the car work in these conditions, but it remains to be seen whether we can do the same when the wear mechanism shifts to traditional high temperature degradation. One thing we can be sure of is that Malaysia will deliver high temperature degradation in spades. We haven't seen anything other than good long run pace from the E21 so far, but we will have a much clearer idea of where things stand after second Free Practice on Friday. We feel optimistic but it's still very early and anything can happen.

Any changes to the car for the second round?
JA: We have an experimental exhaust and bodywork combination, and a new front wing to try out. However, with tyre performance likely to play a critical part in the weekend, we will need to be careful not to get overly distracted trying out new parts at the expense of finding a good setup to make sure that we are using the tyres well. We will be aiming to keep the momentum up and hoping that we can repeat Kimi's fantastic performance again this weekend with both cars.