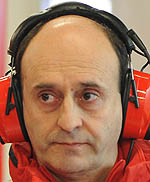 Ahead of the new formula in 2014, one keen observer at Barcelona is Ferrari's engine guru - officially Head of Engines and Electronics - Luca Marmorini.

One of the hot (no pun intended) topics in the paddock at present is exhausts, and while there is debate over the legality of those on the Williams and Caterham, it was the problem suffered by Fernando Alonso that got tongues wagging. However, Marmorini was keen to play down the situation.

"We tested the exhaust right to the very end of its life, as we need to know where are the limits and this failure can therefore be seen as part of our routine work at the track," the Italian told reporters.

"The rules governing the exhausts are exactly the same as last year, therefore we expect similar performance gains to come from the exhausts, but nothing more. While the rules are very strict regarding the configuration of the exhausts and the engine mapping, the emission of exhaust gases still has an effect on the aerodynamics of the car. At the moment, all engine engineers are a little bit unhappy that we have to compromise engine performance, but we can afford to lose some engine power if the car is quicker."

With this in mind, he confirmed that the team will continue to work on finding the best possible exhaust configuration for the F138 throughout the year.

Asked to explain the importance of running engines for customer teams, he replied: "They provide a very important opportunity for us. It gives us more engines from which to get information and, with testing banned during the season, it provides us with a much wider data base."

Finally, there was the obvious question regarding next year's change of formula which sees a return to turbo-charging.

"We have a team working on 2014 engines," he admitted, "and while we cannot say everything is already set in stone, it's true to say that the development phase is already quite advanced. It's just over a year that we've had an engine on the dyno. It's definitely interesting from a technical point of view but there is still a lot of development work to be carried out, not just at Ferrari but for all the teams, who will have to use the same turbo, which is of a completely different type to the one we saw back in the Eighties.

"It's a very tight deadline, but we have got an intensive development programme in place and we hope to have a power train that delivers good performance with reliability right from the start of the 2014 season.

"At the moment, no ruling has been put in place which would allow us to test the new type of engines outside the usual testing limitations. However, I would estimate that, by the second half of this season, every team will have an engine that, while not being the finished article will be the engine that will be used in 2014 and the top teams will have an engine that is 90% the same as the one that will be raced next year.

"And of course, with the rule change, this new engine will be expected to complete almost double the mileage of the current ones and getting it to run reliably will be a very big task."