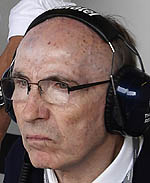 Despite continued pessimism regarding the financial problems Formula One is facing, it is good to see that in addition to retaining existing sponsors, some teams are bringing new partners on board.

On Tuesday, Ferrari revealed a sponsorship agreement with UPS, the leading global logistics company with a presence in over 220 countries around the world.

The multi-year agreement will not simply be limited to the role of sponsor to the F1 team but will also extend to the racing activities run by Corse Clienti, including participation in the FIA World Endurance Championship and an involvement in the European series of the Ferrari Challenge Trofeo Pirelli championship.

Furthermore, UPS becomes Ferrari's Official Logistics Partner through the gradual integration of its own transport services providing freight movement on a global level.

Elsewhere, at the launch of its 2013 contender, Williams welcomes Experian, the global information services company, as a new partner on a multi-year agreement. As sponsors, the Experian logo will be visible on the chassis side and front wing of the FW35, and appear on each driver's overalls, their respective helmets, and team personnel's kit.

As if that wasn't enough, Williams also revealed that it had signed a renewed partnership agreement with Wihuri, one of Finland's most respected business enterprises, the new partnership seeing the company increase its level of commitment to the team for 2013.

Furthermore, and clearly off the back of Valtteri Bottas' promotion to a full race seat, Kemppi, a world-leader Finnish company in the manufacture of welding equipment, announce that it had signed an upgraded partnership with the British team.