Byrne to assist with Ferrari's 2014 contender 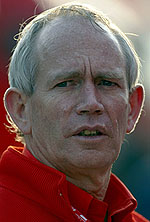 Former Benetton and Ferrari design guru Rory Byrne is working "full steam" with the Maranello outfit on its 2014 car, in anticipation of the new formula.

Byrne, who, along with Ross Brawn and Michael Schumacher, formed the triumvirate that won countless races and seven titles at Benetton and then Ferrari, effectively retired at the end of 2006 when the Maranello management opted for a clean sweep which included the recruitment of Kimi Raikkonen.

Having handed over to Aldo Costa, Byrne remained as a consultant for the next couple of years, though there has been speculation about his continuing influence within the team, some crediting him with input in the squad's 2012 contender.

Spotted at the recent launch of the F138, it has emerged that the South African is not only working with Ferrari again but playing a major part in the design of the car with which the Italian legends head into a new era for the sport.

"The 2014 car will be very different," agreed Pat Fry. "Aerodynamically the exhaust effect is changed with the turbo and exhaust positions being different, the front wing development will be new, while the rear wing constitutes another major change."

A team spokesperson subsequently confirmed that Byrne is working on the new Enzo (road car) project but is also providing "operational support" in terms of the 2014 F1 car.

Since Costa's departure in July 2011, the Italian subsequently joining Mercedes, Ferrari has radically restructured its design department forming two groups one headed by Simone Resta, who is responsible for the F138, and Fabio Montecchi, who heads the 2014 project. Both report to Nicolas Tombazis who is being assisted by Byrne.