Alonso: I'm not good at politics 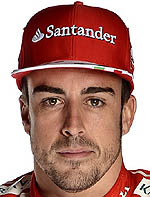 Weeks after his boss, Luca di Montezemolo, revealed that he was not pursuing a move into politics, Fernando Alonso insists that he too has no interest in the 'black art'.

In the same way that sections of media refuse to take no for an answer and insist on seeking a Ferrari 'super team' comprising the Spaniard and Sebastian Vettel, so too sections of the media insist on making an issue of Helmut Marko's recent claim that Alonso is a political animal.

Speaking to the media in Madonna di Campiglio, while aware that such stories put bums on seats and build the tension long before the season gets underway, Alonso was keen to play down the situation.

"I don't think I am good at politics, I just drive the car," he said. "Some recent remarks have surprised me, but I can't see the sense in them. Some say they don't read them, don't hear them and don't see them, before adding that they are not influenced by them: so clearly they do read them, maybe at night...

"Why do I say Hamilton is the strongest?" he continued. "Because it's what I think, it's my personal opinion and there is nothing political in that. Lewis has always won races ever since he has been in Formula 1, even in years like 2009, when he had started the season with a car that was two seconds off the quickest. When you look at what happens on track, you are well aware of what he is doing, that's a fact. Last year, Rosberg won in China, therefore I expect that this year, Lewis in a Mercedes can win more than one race.

"I did not say that Vettel was not the strongest or that he did not deserve his three titles," the Spaniard continued. "There have been periods, like in 2011, when his performance level was fantastic and he was definitely the best.

"As of today, it's impossible to say who will be our strongest rivals in 2013. Who will have the best car, who will have done the best job of preparation and had the best development, who will be the luckiest: there are so many factors which go to make the strongest combination of driver and team.

"On the technical front, I think that this year, the key will again be the management of the exhausts," he added. "It's true it's not as important as two years ago, but we saw last year that it still played a significant role and that everyone worked on it a great deal. The tyres are not as critical, unless there is a specific problem, as for example we had with the hardest compound in 2011: they are the same for all the teams and, if they are within the mean point, they won't make the difference, neither for the better nor for the worse."

Finally, clearly still aware at the media's ability to invent facts, and gullible members of the public believing them, he paid tribute to Twitter.

"Since I started using Twitter, I am the one who says what I am doing," he laughed. "Before, it could be said that I was spending my holiday with elephants or that I was having dinner with Obama, but now for example, I can be the one to say that I was in Italy, skiing on New Year's day before going to Russia and from there to Brazil to take part in the kart race organised by Felipe.

"Tweeting means I can be in direct contact with my fans, to help them discover aspects of my job that they would never get to know otherwise. Of course, I can't say everything because in Formula One, a lot of information has to remain confidential, but I think it is still a fun and useful tool."

And with that he got back on his elephant and headed off for a (Tesco value, prancing horse) burger with Obama.