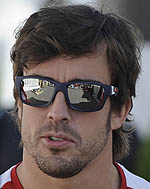 Despite what's at stake, possibly the coolest man in the Interlagos paddock today was title contender Fernando Alonso, who refuses to get caught up in the hysteria insisting that this is just a "normal weekend".

"I will treat this as a normal weekend, trying to score as many points as we can," he told reporters. "It would be good to finish on the podium to score a minimum of fifteen points and then when we cross the line, we can see where is Sebastian and try to do the numbers. So, the podium and the chance to score more than thirteen points is our first priority. What Red Bull does is not in our hands, but we don't have much to lose, we can only win so we will try and do our best."

Asked about his team's decision to break the seal on his teammate's car in Austin, thereby incurring a penalty for the Brazilian but moving Alonso to the clean side of the grid, thereby facilitating a start that kept his championship hopes alive, the Spaniard was in no doubt. "I think we have seen many teams, this year, and in the past, doing things to gain a strategic advantage by finding limits in the regulations. It was a strategic decision to get both cars on the clean side, given that we also had the Constructors' title as a target. It worked quite well and if some people were not happy, I am still proud of my team, because it always tells the truth about what it does."

Naturally, memories of 2010, when the boot was on the other foot and Alonso held a fifteen point lead over the German coming into the final race, spring to mind, however, Alonso refuses to draw comparisons.

"This time the situation is different, because now we have DRS and KERS which makes overtaking more easy and even if you start from back on the grid you can make up places, as indeed we saw in Abu Dhabi this year, when Seb started last and finished on the podium.

"This is Formula One, this is a sport and anything can happen right to the chequered flag. We will try and do the best we can and try to cross the line on the podium. If we win we will be very happy, but we know we need some strange combination of a result. If we don't win, we will congratulate him and try again next year. If the race is run in normal circumstances we should finish second as it will be very difficult to recover 13 points. If something happens, maybe we can win the championship. But as it is not in our hands really, the pressure is much less."

Looking ahead to next year, Alonso was asked what his team's target should be over the winter. "We were not happy with the car, from the moment it went on track in Jerez," he admitted, "but we managed to improve it enough to end up challenging for the championship, so there will be many changes for next year. Compared to the other teams, we will have to do more work over the winter to close the gap."