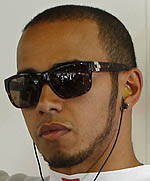 With four rounds of the 2012 season remaining, and 63 points adrift of championship leader Sebastian Vettel, Lewis Hamilton says his focus will now be on the constructors' title.

"For the rest of the year now it's just to try and help the team win the constructors' championship," he told reporters ahead of this weekend's Indian Grand Prix. "Realistically we are too far away, I would say, to win the drivers'... but if we did through some kind of miracle, then I'll eat my words."

Wins in Hungary and Italy were sandwiched between a string of disastrous events including accident damage late in the German Grand Prix, a gearbox problem in Singapore and Romain Grosjean's moment of madness at Spa. Consequently, the Englishman can only watch as the title fight becomes a two-way affair between Vettel and Fernando Alonso.

"When I won the world championship, I wasn't as lucky as Sebastian has been to have a car that's as dominant the next year as well," said Hamilton.

As well as the season coming to a close, so too is the long relationship with McLaren, the team with which he has been involved since the age of thirteen.

However, rather than becoming maudlin, the 27-year-old prefers to focus on the remaining races, leaving the farewells and speeches until after Brazil.

"I haven't sat down and spoken to anyone just because we're still in the motion of the year, it's not the end yet," he said. "It's important now to try and keep the motivation up high, so when I went back I did the normal things that I do," he added referring to a visit to the team's Woking HQ last week.

"I spoke to Ron (Dennis), we're planning to meet up, I think it's in Abu Dhabi. We'll go for dinner, have a good chat," he added, referring to the man who has nurtured his career almost from the outset. It is understood the conversation to which Hamilton is referring is the first time the pair have spoken since he announced his intention to move to Mercedes.