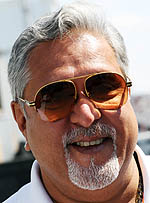 The non-bailable warrant was issued on October 12 against Kingfisher Airlines in respect of a number of cheques issued by the company which weren't honoured. The warrants were issued against Mallya and four other executives.

However, after the Ł1.25m debt was settled, GMR, the owner of Hyderabad International Airport, the company to which the money was owed, cancelled the warrants against all five executives.

Speaking in Korea last weekend, as news of the warrants filtered through the paddock, the team's deputy principal, Bob Fernley, insisted that the move would not impact the team.

"It doesn't affect the team at all," he told Reuters. "It has no bearing whatsoever. I don't think it will go anywhere. It is an offence in India to issue a cheque without the funds being there, for sure. There is substance in that, for sure. Why it was done I don't know. It is so far below Vijay he wouldn't have a clue what is going on anyway."