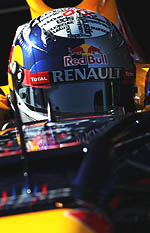 The correct tyre strategy was instrumental in securing Sebastian Vettel's first victory of the year at the Bahrain Grand Prix, with the Red Bull driver selecting a three-stop strategy to seal his 22nd career win after claiming pole position in qualifying. At the end of four races, four different teams have now each claimed a race win and Vettel has become the fourth different drivers' championship leader.

Bahrain is one of the most demanding circuits of the year in terms of tyre degradation, due to a frequently dirty track and several low to medium speed corners that ask a lot from the rear tyres in terms of traction.

As a result, knowing how to manage the tyres and contain thermal degradation was a vital skill throughout the 57-lap race, although the grand prix started in comparatively cool conditions with gusting winds and track temperatures of around 32 degrees centigrade.

Most drivers selected a three-stop strategy, but Force India's Paul di Resta opted for a two-stop strategy. The Scot made his final set of medium tyres last for 24 laps before ending up sixth, having started from 10th on the grid after not completing a qualifying run in Q3 in order to save tyres. Di Resta finished just behind Mercedes driver Nico Rosberg, who chose to do just one run in Q3 to conserve an extra set of softs.

Lotus GP driver and former World Champion Kimi Raikkonen started 11th on the grid after missing out on Q3, but this also meant that he saved several fresh sets of tyres for the race. The Finn used these to good effect, challenging Vettel for the lead from the halfway point on the race, when Raikkonen was on the medium tyre and Vettel on the soft. During their final stints, after they both stopped on the same lap, both drivers used the medium compound. Having brought the tyre up to temperature, Vettel was able to pull away from the Lotus driver, but Raikkonen closed back up to him in the closing stages after conserving the tyres at the beginning of the final stint.

Mercedes driver Michael Schumacher also used a three-stop strategy to climb back up the field, finishing in the points after having to start 22nd on the grid following a gearbox change penalty.

Paul Hembery: "This was certainly a very technically challenging race, on a circuit that we had never experienced in racing conditions before. Nonetheless, we chose to bring our soft compound together with the medium in order to provide plenty of opportunities for strategy. Although degradation was a factor in this race, which was already evident from the tactics adopted in qualifying, the tyres stood up extremely well to the demands that were placed on them. During the closing stages of the race, the priority for the drivers was to ensure that the tyres didn't fall off 'the cliff' of performance: a task that they all managed very well. The closeness of the racing this year, during which we have narrowed the performance gap between our compounds, is reflected in the fact that we've seen four different winners in four races. It was also a great result for Lotus with two cars on the podium - and the first podium for our former test driver Romain Grosjean, who was with us when we tested at Bahrain in 2010: the experience was clearly useful to him. As for Kimi, he seems to have made the transition from our rally tyres to our P Zero race tyres pretty well!"