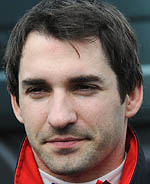 An otherwise very constructive day of solid progress for the Marussia F1 Team unfortunately ended on a slightly less positive note this afternoon when Timo Glock's MR01 ended up in the tyre wall.

Timo had been running exceptionally well and his pace was confirming a positive result with the new developments brought to the car for this weekend in Shanghai. Around 45 minutes into the session a problem with the nose box occurred on the entry into turn 1 and the MR01 was forced into the gravel before an impact with the tyre wall brought it to a halt. Initial concern at Timo's slow response and comments on the radio regarding pain in his hand gave way to relief that he has suffered no significant injury beyond the expected energy released from the steering wheel on impact.

The team conducted an immediate and comprehensive check of the nose-wing assembly fitted to Charles' car before returning him to the track. Once Timo's car was brought to the garage at the end of the session the investigation continued and the team was able to establish that there was no failure of a mechanical nature.

With Timo thankfully declared fit and well and the problem clearly isolated, the focus now returns to the resumption of the running plan and reaping the clear dividends from a very positive set of upgrades to the car.

Timo Glock: "In general a positive day of progress with the car and I was happy with my pace and the way the car was working. Unfortunately we have experienced a problem which points towards an operational issue. While this is disappointing, we can at least be sure that this was not a car issue of any kind. In fact, the package, including the new developments, seems quite promising and I was happy with the good balance. There is damage to the car, as you might expect from the impact, but it is mainly cosmetic and the chassis is fine. A long night for the mechanics I think, so a frustrating outcome all round to an otherwise trouble-free day. Personally I am fine. Initially I had some pain in my hand from the steering wheel when I hit the wall but no lasting damage."

Charles Pic: "The day started with very tricky conditions in the wet, but we managed to complete our full aerodynamic programme which was important for us. This afternoon we did race simulation work and put the Pirelli Soft option tyre on at the end of the day. Overall it has been a positive result. This is a new circuit for me and Timo's position demonstrates that there is more to come, so that will be the target for me tomorrow."

John Booth, Team Principal: "First and foremost we are obviously relieved that Timo seems to be fine. The next significant point is that we have clearly identified that the cause of the incident was not of a mechanical nature. This clarity enables us to push forward with our programme with confidence and continue to explore what, based on this morning's performance, seems to be a very positive step forward in aerodynamic terms. We have brought developments for the front wing, the rear brake drums and the floor here and the results shown in today's running leave us very optimistic about the direction we are moving in. It's frustrating therefore that we have found ourselves with the problem we encountered today but we can at least turn our thoughts to the rest of the weekend now. Charles has played his part in an otherwise strong performance by the team today and he has once again come up to speed very quickly on his third consecutive unknown circuit. It will be a late night for sure but we look forward to a better end to tomorrow's programme."