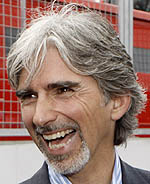 It has been revealed that a protest group in Bahrain has written to Bernie Ecclestone demanding that the forthcoming Grand Prix be cancelled.

The group, the Coalition Youth of Feb 14 Revolution, wrote to the F1 supremo in late February, but only now have the contents of the letter been made public.

"Mr Ecclestone, we are very disappointed at your recent statement confirming the organisation of the F1 race in Bahrain, notwithstanding the prevalent political unrest, insecurity, widespread violations of the most basic human rights and the atrocious crimes perpetrated every day against the people of Bahrain.

Those reasons were the same that led you to call off the race last year, a situation that has not eased but exacerbated.

Your statement has done much wrong to the F1 race and given a bad impression the F1 races are all about money and greed.

Organising a F1 race in Bahrain at a time when children are being killed in the streets at the hands of the regime mercenaries will haunt the F1 reputation forever and will imprint it with the image of death and human rights violations.

We in the Coalition of the Youth of 14 Feb Revolution address you this letter to say clearly we do not accept the distortion of this popular sport for the sake of obliging a failing dictatorship.

We demand you reverse your decision and call off the F1 race in Bahrain, else wise we will have no choice but to do everything in our capacity to ensure the failure of the race rather than see it stained with blood and shame.

We will appeal to all athletes of the world to support us in this endeavour, to stand in solidarity with our people, and to save the reputation of F1 races from the irreparable moral damage that will ensue from the shameful disregard and unethical attitude towards the suffering of our nation and its legitimate struggle against a barbaric and despotic regime."

Meanwhile, having argued in January that the race should go ahead, Damon Hill, who paid a fact finding visit to the Gulf state with Jean Todt late last year, admits that he now has reservations.

"Everyone hopes they find a resolution to the situation," hr told The National, "not just because it would be better for the Grand Prix, but because it is clearly a high-pressure state of affairs at the moment. There has got to be some change, it's got to change for the better and I hope it does.

"At the time I went, it looked as if things had seemed to improve," he continued, "but things now appear to have stalled a bit. They have had demonstrations of 100,000 people recently. I think there is enormous pressure there for a change and it may affect the grand prix.

"You must remember we see it from a long way off," he added, "we see it through the prism of the European press and from a distance there appears to be a lot of protest, but that doesn't necessarily mean it is not in a condition to have a grand prix."

Hill admits that the final decision regarding this year's race, which is being promoted at as 'Unif1ed: One Nation In Celebration', will rest with the FIA and the commercial rights holder.

"Everyone is watching what the FIA will do," he said. "It is very much in the hands of Jean Todt and Bernie; they set the criteria by which they will agree to return. At the moment the green light is on and we are going back."