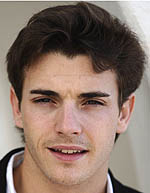 In a surprise move, former Ferrari reserve driver Jules Bianchi has joined Force India for 2012 in a similar role.

According to the Silverstone based outfit, the 22-year-old Frenchman will participate in a minimum of nine Friday practice sessions during Grand Prix weekends. In preparation for the 2012 season, he will get his first run in the VJM05 during pre-season testing next month.

"I'm obviously excited to join Sahara Force India," said Bianchi, "and the chance to get track time during race weekends is an important step for me. Being regularly in a current car is the best way to learn quickly and I hope it will put me in a strong position to one day move into a race seat. The next few months will be really exciting as I get to know the team, see how they work, and prepare for my time in the car. I would like to thank everyone for believing in me and especially Sahara Force India for giving me this great opportunity."

"I am delighted to welcome Jules into the Sahara Force India family," added Vijay Mallya. "We always keep an eye on young, talented drivers and his performance in GP2 certainly impressed us all. By giving Jules the opportunity to be part of our 2012 campaign, we continue to demonstrate our commitment to young drivers. We are proud of our track record in this regard and I have no doubt that Jules will quickly settle into the team and make a valuable contribution to our efforts on track this season."