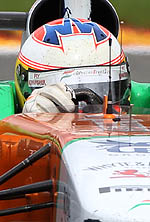 Force India enjoyed an average 2011. There's no other way to really describe a season that was, on paper, no different to the year before. The team scored almost exactly the same number of points in 2011 as it did in 2010 - 69 to 68 - and never looked especially threatening in the process.

In the championship it finished one spot higher than the previous season, however much of that can be put down to the fact that Williams only managed 5 points, and Force India benefited from Sauber's dual disqualification at the season opening Australian Grand Prix. Without the stewards neither Adrian Sutil nor Paul di Resta would have scored points that weekend.

Of course none of this means it was necessarily a bad year for the Indian team, just that it wasn't any better than 2010. From another perspective in Formula One, where most involved would sell their own grandmother for performance, standing still is as good as going backwards.

There was no indication from the team that it was even remotely close to getting on terms with the front runners, though perhaps that's to be expected given its technical tie up with McLaren Applied Technologies. While it may not be the case, any technical tie-up suggests one team lacks ambition.

From a racing perspective the season uncovered Paul di Resta, the latest Flying Scotsman. Up against the highly rated Adrian Sutil he performed well and it was really only towards the end of the season that Sutil really started to get the upper hand. It was a promising debut season from the Scot, so it came as no surprise that the team retained his services. He also has close links with Mercedes-Benz thanks to his time with the company German touring cars which cannot have hurt.

Adrian Sutil's year was a testing one. His performance wasn't especially bad but he never stood out like one would expect a driver of class to. Many believe Sutil has that ability but instead he was merely consistent. It's true he out-scored his new teammate but then he should have, shouldn't he, he was the senior member of the team.

Sutil was in a no-win position in 2011. If he'd succeeded it was likely going to be the car, or di Resta was out of his depth - it would not have been a result of the German's brilliance. Conversely if he'd failed we'd have pointed at di Resta and the fact he raced with (and beat) Sebastian Vettel in the junior formulae. As it was Sutil did his job, but di Resta was a little too close for comfort.

The Chinese nightclub incident didn't help. Why would teams take a gamble on a driver with an unknown future when there are already so many talented youngsters falling over themselves looking for a drive - someone like Nico Hulkenberg, for example. Once that incident came to light it seemed Sutil's future in Formula One was on borrowed time.

Expectations from Force India are therefore low ahead of 2012. Somewhere around mid-table with a good helping of Q3 appearances and consistent points finishes at the back end of the top ten is about where the team is at.

Perhaps the coming season will be a little harder, if Williams gets its act together and Renault (err, Lotus) finally becomes a front running team instead of hanging on to the coat tails of those ahead. Should that happen there would be fewer point scoring opportunities, meaning, in all probability, a leaner season.