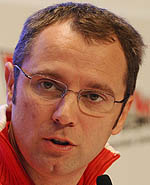 With the current Concorde Agreement expiring at the end of year, Stefano Domenicali believes 2012 is a crucial year in the history of the sport.

"Clearly this is a very important year and we are all aware of that," he told reporters at the Italian outfit's annual media event in Madonna di Campiglio. "It is equally clear that there is only one offer on the table, given that no alternative solutions were ever established.

"In the coming months, talks will get underway on the future of the Agreement as we are still in discussion, especially with the bigger teams, despite the fact we have left FOTA, on the subject of cost reduction, discussions where Ferrari has always been at the forefront.

"Furthermore, one must bear in mind that the RRA is still in force," he continued, "what still needs to be established - and this something we are looking at - is if we should abide by the first version, signed in 2009, or the one drawn up in Singapore in 2010. The first one envisages very severe spending cuts for 2012, the year it should run out, while the one signed in Singapore has a revised figure and is valid right up to the end of 2017.

"The key point is to understand if this is an important tool for the future," he added. "What should happen to those who do not abide by the rules: today, only a financial type of penalty is planned, but we need to decide if it would not be better to think also of something on the sporting front and, in that case, who should decide the outcome."

While the teams have made overtures in terms of buying the sport, this is widely considered to be a ploy ahead of the main negotiations with Bernie Ecclestone. However, the fact that Ferrari and Red Bull have left FOTA, indicates that, like before, Ferrari, at least, is willing to cut a deal with the F1 supremo.