Virgin confirms Glock and Pic for 2012 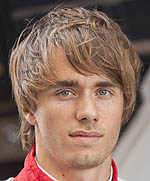 Just three hours after the end of today's Brazilian Grand Prix, Virgin has confirmed that Charles Pic will partner Timo Glock in 2012.

Last week, at the Young Driver Test in Abu Dhabi, 21 year old Pic spent the equivalent of two days in the MVR-02 working through a detailed evaluation programme. His opening lap was his first-ever experience of a Formula One car and he went on to impress the team with his solid progression through a series of tests designed to examine every aspect of a driver's all-round potential, including raw speed, decision-making, quality of feedback and the ability to contribute to the team's ongoing development.

Pic has spent the past two seasons competing in GP2, and in 2011 he ended the year in fourth place with two wins, three pole positions and five podium finishes. From 2008-2009 he raced in the World Series by Renault FR 3.5 championship and during the preceding two years he graduated from Karting to the French Formula Campus championship before going on to take part in the French and European championships of Formula Renault 2.0.

He will spend the next few weeks with Marussia Virgin Racing at its technical centre in Banbury, UK, embedding himself within the team before pre-season testing begins in February next year.

"I'm very pleased to welcome Charles to Marussia Virgin Racing as Timo's team-mate for 2012," said John Booth. "We naturally keep a close eye on the junior formulae and Charles is certainly someone we have been watching over the past few years. The real barometer however was our Young Driver Test in Abu Dhabi last week, where we put him through a series of tough tests to thoroughly evaluate his potential. This was his first time in a Formula One car so it should have been quite daunting, however Charles was extremely focused on what needed to be done and absolutely rose to the challenge. He continued to improve in every area but his race simulation work particularly caught our eye.

"Winter testing will be upon us before we know it, so it is actually a relatively short space of time ahead with a lot for Charles to get used to, but he is an extremely determined young guy and he worked very well with the team last week. He has an extremely mature head on young shoulders, so I have no doubt that he will be working very hard over the winter to prepare for his debut season.

"I would like to take this opportunity to thank Jérôme D'Ambrosio for his hard work and important contribution to our team over the past 12 months or more. He has an exciting future to look forward to I'm sure and we wish him every success."

"I'm very happy to be making the step up to Formula One with Marussia Virgin Racing," said Pic. "As a driver you always feel you are ready for the next opportunity but in Abu Dhabi last week it was a tough test. The team gave me some fantastic opportunities to learn new things but I also knew that I had to impress them and show them I was ready to do a good job. I was pleased with my performance, and obviously the team were too, so a very good start but this is just the beginning and I know that a lot of hard work is ahead of me to reward this chance.

"I like the team a lot; we worked well together in the test and I feel very comfortable. They want to do things the right way and I can see that there is a lot of determination to succeed, so it is very special for me to be part of that. I'm looking forward to working hard in every area over the winter to ensure I am ready for the start of testing and my first Grand Prix."