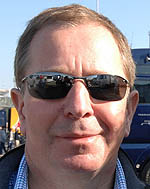 Martin Brundle has confirmed that he will be leaving the BBC to join Sky Sports F1 team in 2012.

Writing in the Sunday Times, the Englishman confirms what has been widely speculated for some time.

"In 2012 I will be working with Sky Sports F1 television. The fact that their newly-announced and dedicated F1 channel will have no in-race advertising was a key factor, but most importantly I need to commentate on every race live. Recorded and delayed sports television doesn't give me the adrenalin fix I crave.

"There will also be more airtime for the technical features I so enjoy crafting," he continues. "It's been a privilege to be part of the BBC team, but now I have a new motivation and challenge."

Brundle stepped up to the role of lead commentator this year, forming a popular partnership with David Coulthard. However, with a year remaining on his BBC contract the Scot will not be jumping ship just yet.

Though Sky has yet to confirm its team, Pitpass has been claiming for some time that he will be joining David Croft, who is also leaving the BBC, in the commentary box. Ted Kravitz is to head the Sky pitlane team, while the show will be presented by Sky's Rugby presenter Simon Lazenby. Earlier this week it was reported that Sky is seeking to sign Nigel Mansell as one of its pundits.

Both Sky and BBC confirmed its plans for 2012 on Friday, the British state broadcaster showing ten races live over the course of the season and the rest shown as highlights later in the day. Sky, which will have a dedicated F1 channel, as it did in 2002, has all the races, though Bahrain and Austin are still in doubt.

Those that don't have don't have Sky will have to sign up to the satellite broadcaster, the minimum term being twelve months.

The deal came about because the BBC, which had a contract with FOM, argued that it was unable to meet the financial demands it had previously agreed to. However, instead of seeking a deal with a rival terrestrial channel, or indeed selling off the F1 rights to one of its terrestrial rivals, it arranged the deal with its most dreaded enemy, Rupert Murdoch.

The BBC, which in 2007 issued a formal editorial policy on global warming stating that "the weight of evidence no longer justifies equal space being given to opponents of the consensus", will continue to send its full broadcast team to all races.