Barrichello: In Grove we trust 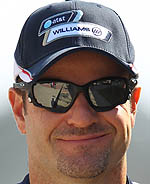 Rubens Barrichello remains hopeful that Williams will see the light and retain him for what would be his twentieth season in Formula One.

With Williams said to be keen to secure the services of Kimi Raikkonen - though few can really see this happening - and Adrian Sutil also known to have had talks with the Grove outfit, Barrichello's options are limited.

However, talking to reporters in Abu Dhabi, the Brazilian veteran said he remains hopeful. "There are a lot of talks. I believe they are talking the truth to me, and the truth is that the rumours are much bigger than the reality," he said.

"I just have to wait and believe, and when I have conversations to look in the eye of people. I believe they seem to be saying the right things for me."

Asked about the continuing speculation linking the team with Raikkonen, a rumour given a boost by shareholder Toto Wolff last weekend, Barrichello joked: "To be honest, I never talk to Kimi. Even when he was racing he never talked to me. I believe that he had very little talks with the team, by any means.

"I can't talk anything bad about Kimi" he continued, "I can't talk bad about anybody. I think all are in contention, I just hope I'm the better option."

Looking ahead to the season finale in Brazil, a race which could mark the end of his F1 career, he added: "I'm not saying goodbye to my fans. I want to be there next year, taking the risks. If I was in my first or second year then I'd be very worried, but it's been such a long time, and life is too good to be moaning about problems and why they haven't signed me just yet."