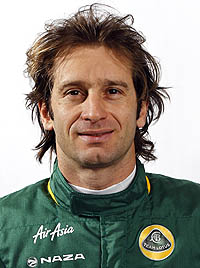 Karun Chandhok: "It felt great to finally be able to drive an F1 car here at the Buddh International Circuit, and it was a real honour to be the first car to set a timed lap in front of the fans. I want to thank the team for giving me that chance, and everyone at the Jaypee Group and all the people involved in helping create the first ever Indian Grand Prix for doing such a great job on the whole event. In the car I was pretty pleased with how it went today. We completed most of the morning programme and without the yellow flags at the end of the session I'm pretty sure there was another second in hand on my final lap time. The track itself is really enjoyable to drive, particularly the middle section which is very quick, and as it evolves and the times keep coming down I think we'll see some very good racing here all weekend."

Heikki Kovalainen: "I'm reasonably pleased with how it went this afternoon but think I suffered a bit from not running this morning. Still, you have to deal with what you have in front of you so we worked hard in the afternoon session to get used to the track and find a balance that gave me the confidence to push. There's definitely quite a lot more to come from the car and as the track evolves I think we'll see that the fact we're pretty kind to the soft tyres should help us, probably more on Sunday than tomorrow, but we'll see."

Jarno Trulli: "That was a very smooth Friday and we made good progress in both sessions, both on learning the track and on the best setup here in India. The track is not too hard to learn but it's interesting - there are a few different lines you can take and I think that will encourage overtaking, so Sunday's definitely going to be fun. The track surface developed quickly today and I hope it continues to do so - off line it's still very dusty and that could catch out a few people, so let's see how it evolves over the weekend. On the tyre side I think we've seen some interesting results today. The softs seem to hang on very well over the long runs but the hard tyres have almost no grip and it seems pretty tough to get them up to temperature. We'll have to see if that's the same tomorrow as it could change as the track keeps developing."

Thierry Salvi, Renault Sport F1 Support Leader: "This was obviously our first time running here in India so the first task was to take a look at how the gear ratios we had run on the dyno worked when we were actually on track. It looks like we have made the right choices as we hit our targets around the whole track, particularly on the full throttle ratio which plays an important role around this type of circuit, which is pretty similar to Korea."

Mike Gascoyne, Chief Technical Officer: "An excellent first day here in India for us. We were able to complete a very decent number of laps on both cars and completed the whole program we had set for all three drivers today. This morning Karun was the first car out to set a timed lap here and that was obviously a special moment for him, but he focused on the job he had to do and worked through the aero program we had set him. This afternoon we worked on tyre evaluation and we made good progress on a track that looks to be very exciting for the drivers and fans, and a good challenge for the engineers, so from our perspective this has been a very good day."

Tony Fernandes, Team Principal: "I am delighted to see the Indian Grand Prix get under way in such a good style, both for the Indian fans and the team that put the race together, and for our team who have had a very good Friday on track. It started with an historic moment for Karun as he became the first driver ever to record a timed lap in an F1 car at the Indian Grand Prix, and I am very pleased for him that he finished the session as the fastest Indian driver out there, having completed his program and putting in another strong performance. This afternoon both Jarno and Heikki were also very strong, Jarno finishing FP1 a couple of tenths away from the cars ahead and in the afternoon session both drivers looking strong on heavy fuel on both tyre compounds, which bodes well for the race. We are finishing the season extremely well, both in terms of reliability and performance, and I think that gives us good cause for optimism for the last three races this year, and looking ahead to 2012."