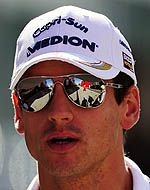 Reports of a clandestine visit to the Williams factory by Adrian Sutil are wide of the mark, says the German. During the week it was suggested that Sutil and former world champion Kimi Raikkonen visited Williams Grove factory, fuelling speculation the Force India driver could be on the move for 2012. "I didn't go there. I wasn't there," insisted Sutil. "I've no contact with them."

Much of the speculation has come as a result of Sutil's personal sponsor, Medion - a German electronics company - which was recently purchased by Lenovo. Believed to be struggling for finances, the injection of funds Sutil could provide would be welcome relief for the beleaguered Williams squad who would also save money in not having to pay Rubens Barrichello a salary.

However Sutil's denials suggest his future lies with Force India, for the time being, while he took the opportunity to suggest his driving prowess should now be enough to guarantee himself a seat. "I have always had a good couple of sponsors," he said, "they've been with me since the beginning and that's important. But I think I don't need sponsors to survive in Formula One."

Meanwhile Force India has announced that it won't make a decision on drivers until December, meaning even Sutil himself doesn't know if he has a future with the team.

"They don't want to tell who will be in the seat, otherwise they wouldn't wait so long," he admitted. "Whatever I do now I have to be fast and score some points. Then hopefully it's enough for them to say 'yes, you deserve another year with us' or not."

When asked if a December announcement prevented him finding a seat elsewhere, the 28-year-old was circumspect. "That's pretty late, not easy, but maybe I have no other chance really.

"I've known the team such a long time, so whatever I do I have to think twice if it's a good next step. I think the top teams are all closed anyway; the top four. Maybe there's no reason to change."