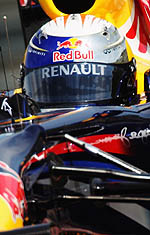 Red Bull Racing and Renault Sport F1 have confirmed the extension of their partnership for a further five years. The new fuel efficient 1.6L V6-turbo power unit to be introduced from 2014 will be incorporated in the framework of an enhanced collaboration.

Building upon the existing world-championship winning partnership, Renault Sport F1 will continue to supply V8 engines and KERS Motor Generator Units to Red Bull Racing for 2012 and 2013, with the new agreement repositioning the relationship between Red Bull Racing and Renault to a premium technical co-operation.

"We are delighted that the Red Bull Racing-Renault partnership has been extended for a further five years," said Bernard Rey, President of Renault Sport F1, "which will take us to a decade of collaboration. Red Bull Racing and Renault share the views that stability is a fundamental condition to perform at the top levels of competition. As well as being a unique opportunity to showcase the performance of the Renault engines at the highest possible level, it is also is a fantastic arena to develop the technology and expertise within the Renault-Nissan Alliance."

"The V6 power units due to be introduced from 2014 represent a huge undertaking and to have the input, resources and vast in-house F1 car expertise of Red Bull Technology will help the team at Renault Sport F1 in Viry-Chatillon specify, design and develop a competitive unit from the start of the new regulations and optimize its structural integration into the chassis," added Jean-François Caubet, Managing Director of Renault Sport F1. "Having this particular support will of course be to the advantage of our other team partners, who will indirectly benefit from the joint expertise of the Red Bull Racing and Renault Sport F1."

"We're obviously thrilled to announce this significantly enhanced agreement with the Renault-Nissan Alliance, who we have enjoyed a close working relationship with since 2007," said Christian Horner. "Renault Sport F1 has always been very straight-forward to work with, which has been a contributing factor to the on-going success of the Red Bull Racing-Renault partnership. Together we have so far achieved 22 wins, 32 pole positions, 1130.5 World Championship points and two World Championships. As the relationship moves forward, we intend to build on this and look forward to working with the Renault-Nissan Alliance during future Formula One World Championship campaigns."