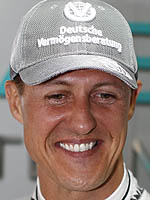 Michael Schumacher has dismissed reports that he is to quit F1 at the end of the season, saying he'll be back in 2012 whether people like it or not.

Talk of the German calling it quits surfaced last week when Corriere dello Sport claimed the German had admitted to being disappointed with progress this season and intending to retire at the end of the year. The comments were immediately denied by Schumacher's agent and now the German has gone on record, insisting that he'll be back next year.

While attending 'Magic Moments' in Stuttgart, an event celebrating 125 years of Mercedes-Benz automobiles, the 42-year-old was asked about the speculation.

"Despite some funny rumours and stupid untruthful stories, I keep repeating myself, that you will (have to) see me in 2012," he said. "Who likes it or not likes it, I will be there.