Todt: We must be more specific about rules 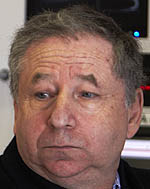 In the wake of the most recent rules U-turn, FIA president Jean Todt admits that the sport's governing body must do more in order to prevent ambiguity.

In recent times the FIA has been forced into a number of U-turns, not least the Bahrain Grand Prix fiasco. However, the sport's governing body hardly covered itself in glory when it came to the blown diffuser pantomime which saw the rules virtually being changed session by session, leading to claims that the FIA was making them up as it went along.

Now, Jean Todt has said that in future when drawing up rules the FIA must be more specific in order to avoid such situations.

"The teams interpret the rules in such a bizarre way that they break them," he told Italian New Agency AGI. "We must be more specific, so that everyone applies them."

Asked about the U-turn that saw the Bahrain GP cancelled, he said: "It was postponed because of political problems, and for this reason we decided not to put it on the calendar in 2011.