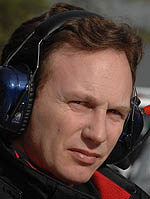 Despite rule changes that appear to be aimed at slowing down Red Bull's progress towards the 2011 titles, the Austrian team seems remarkably confident.

With blown diffusers banned from next month's British Grand Prix, the FIA has also rushed through yet another mid-season rule change, this time banning changes to the engine mapping between qualifying and the race. While officially it is claimed that this is to make the playing field just a little more level, it is widely felt that the main aim is to stifle Red Bull's runaway success, particularly in qualifying.

However, speaking in Valencia, the team appears confident that despite the legislative hiccups, it will be business as usual.

"I think in reality it will affect the front-running teams a very similar amount," team boss Christian Horner told reporters. However, when it was suggested that the blown diffuser and engine mapping were the main reasons for the competitiveness of the car this season and in 2010, Horner smiled and replied: "We'll deal with it, we'll move on. We've got some parts in the pipeline for Silverstone and hopefully we can be competitive there," he added.

"There are no secrets," added world championship leader Sebastian Vettel. "We had some phases last year where people thought we had some lever in the car. It turns out we didn't.

"From what I know, I can assure you there is nothing special going on from Saturday to Sunday," he added, referring to the engine mapping."

As ever, Mark Webber was a little more succinct. "It is nothing new for our team to adapt to a change in regulations," said the Australian. "I don't think it is going to turn the field upside down. I think everyone will still be in reasonable shape. McLaren and Ferrari are fast, we know that. We are quick but the changes, whether they will turn the championship around, I think it is unlikely."