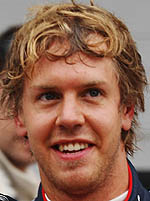 However, the main talking point - in terms of the weather - is that here, in Abu Dhabi, in the desert, we've had rain, and lots of it. It began just after the start of the GP2 practice session - around two hours ago - and pretty much continued for the next hour or so. What did we say about Bernie and rain dancing?

As Mat Coch texts: "The standing water was initially so bad the Porsches were leaving a wake - no word of a lie or exaggeration - which you could see for a good minute or so after a car had been through. Drainage doesn't seem to exist so much around the wiggly bits towards the end of the lap. The start of the lap looked fine. However, with the heat once it stopped raining it soon dried up, the track is not bone dry now but pretty close.

Tyre choice this weekend is medium (prime) and super-soft (option). In this first session, Fairuz Fauzy is in Heikki Kovalainen's Lotus, the only reserve driver on duty this morning.

As Klien heads down the pitlane, followed by di Grassi, Alguersuari and Buemi, the track has most dried with only the pitlane still looking quite damp. Indeed, those drivers out on track are on intermediates. The session has been declared wet but the desert sun should soon sort that out.

Five minutes into the session all but Hamilton have been out with Liuzzi - using an old pre-season test chassis - and Kobayashi having completed two installation laps. A number of drivers make little errors on the slippery track, including Schumacher, with Fauzy spinning but keeping away from the barriers.

Glock is the first driver to make the switch to slicks however, the Virgin soon comes to regret his decision, the track still not quite dry enough for the dry tyres.

Webber goes out for a solo run, the rear end of the Red Bull covered in high-vis flow paint as he tries out a number of ideas for Adrian Newey.

As Piero Ferrari - son of team founder Enzo - chats with Alonso, Vettel is in an animated conversation with a Renault engineer.

Hamilton is on track (on slicks), his team intending to use a new rear wing this weekend. In the Red Bull garage Vettel is now chatting with Helmut Marko.

After an interminable period of total inactivity, Rosberg (inters) finally breaks the deadlock. With 53:55 on the clock we have yet to see a time on the timesheets.

While one understands that conditions are not ideal, they're not exactly that bad either. This being such an important event one would have thought that the teams could put on a slightly better show for those fans in the stands and those watching on TV.

In the Toro Rosso garage Alguersuari admits that he wants to see how someone else deals with slicks - a view that appears to be shared by the other twenty-three drivers.

With nothing else happening, what better time to thank Paul for going along to the launch of Mick Rock's book in Shoreditch last night and getting us a dedicated copy. Mick Rock being the photographer who took so many of those iconic pictures of Lou Reed, David Bowie, Iggy, Queen and so many more. Indeed, Paul was so impressed he bought a copy.

At which point hoorah… Hulkenberg and Petrov head down the pitlane. The Russian, on slicks, struggles to keep the car under control. It really is a lot more slippery than it appears. Fact is, with only four or so days of rain a year (!!!) the circuit isn't really equipped for such conditions. The good/bad news is that further rain is expected this weekend.

Petrov, despite the horrible handling of the car, crosses the line to post the first time of the weekend (1:51.465). Moments later, Hulkenberg, also on slicks, posts 51.207. Fastest time in last year's opening session was 1:43.939.

As more and more drivers pour on to the track, Petrov gets down to 47.794.

Massa is the first of the big guns to go out, the Brazilian going third on his first flying lap with a 48.886. As he looks set to improve - having gone quickest in S1 - he is told to pit, the team having encountered a "small telemetry problem". However, the Ferrari driver stays out and goes second with a 47.280.

Webber goes seventh (49.320) as Alonso goes ninth (58.680) as Vettel and Hamilton remain in their respective garages.

A 45.807 sees Alonso go quickest as Kobayashi runs wide. Ferrari, which usually uses Friday's purely for testing, appears to have changed its approach today. Kubica goes third (46.028), ahead of Webber, Alguersuari and Liuzzi.

As Button and Vettel head down the pitlane, Webber goes quickest with a 45.177. Back in the pitlane Ferrari is practicing pitstops with Alonso while in Massa's half of the garage the Brazilian's crew are furiously working on his car.

Still seeking employment for 2011, Heidfeld goes third (45.998), only to be demoted when Vettel goes straight to the top of the timesheets with a 44.274. In response, Webber goes quickest in all three sectors, crossing the line at 43.840.

A big lock-up sees Schumacher run wide in the final corner, the German currently eleventh 2.65s off the pace.

As Button goes fourth with a 45.056, teammate Hamilton remains the only driver yet to post a time.

With 23:10 on the clock, it's: Webber, Vettel, Rosberg, Kubica, Schumacher, Button, Sutil, Kobayashi, Heidfeld and Alonso.

On his first flying lap, Hamilton posts 53.222. Next time around he goes quickest in S1 but backs off in S2 due to traffic. Even so, he crosses the line at 50.780 to leapfrog Fauzy.

At the wrong end of the timesheets, Trulli is eighteenth, ahead of Glock, di Grassi, Klien, Senna, Hamilton and Fauzy who appears to have a major problem with the overheating of his exhaust.

Hamilton leaves the newbies behind, posting a 43.862 to go second overall. Moments later, Vettel posts 43.477 having gone quickest overall in S3. One can't help but feel that we're witnessing some early mind games.

Vettel ups the ante with a 43.177 as Hamilton - having gone quickest in S1 - gets all out of shape in the final corner - but still consolidates second with a 43.369.

Button leapfrogs Webber with a 43.785 to make it a McLaren 1-2. Meanwhile, Vettel, having gone quickest in S2, loses time behind Fauzy in S3 and consequently fails to improve.

"I've got a lot of front locking," says Button, "any ideas?"

This time around, with no Fauzy to hamper him, Vettel improves with a 42.760, the gap to Hamilton now up to 0.609s. Both Williams well of the pace, as are the Force Indias and Toro Rossos.

There’s late drama when Barrichello -2.71s off the pace – pulls off to the side of the track with a technical problem.

To check out our Abu Dhabi practice gallery, click here