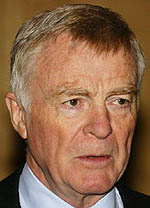 A report in the Italian media suggesting that Max Mosley is preparing a "comeback" as FIA president has been strongly denied.

Earlier this week, the Italian website 422race.com claimed that Mosley is "preparing an action that will bring him back to the picture", alleging that while Mosley has yet to show his hand personally, insiders within the FIA are already hard at work on his behalf.

At a time when - as Pitpass has already reported - it is believed that Jean Todt is seeking to make changes to the constitution of the FIA, 422race.com says that at next week's meeting of the General Assembly people within the federation loyal to Mosley are planning to make their own changes to the regulations.

"Last year, forced not to candidate again, Mosley supported Todt at the elections, probably thinking he could control his moves," says the Italian site. "Todt himself declared, during his campaign, that he was going to bring Mosley's action on. Actually, instead, the first months of his presidency have been very different, both politically (with an effort to make FIA more democratic) and concretely (to modernize Formula One, rallying and mobility), from the ones of the former English president. This upset not only Mosley, but above all Bernie Ecclestone, who has always been the man behind the old number one of Place de la Concorde.

It continues: "Sources close to the current president notice that he is thinking more to the problems to solve than to a possible second term, which he has already publicly said not to aim to. Maybe too much. Todt's detractors, in fact, don't want to wait until 2012, but to immediately weaken the former Ferrari CEO. Will they manage? It's difficult to say."

The site then claims that the decision not to further punish Ferrari for its use of team orders in Germany was a clear snub to Mosley who had previously suggested that both Maranello drivers should forfeit their points.

"This might mean Mosley lost some of his influence inside the FIA," it suggests. "But you can always expect anything from a man like him. To know the results of this suggested rule change, we will need to wait until the 5th of November. Then we will know how many, of the 135 members on 224 who last year voted for Jean Todt, are now willing to support him again."

However, according to Pitpass' sources there is no need to wait until November 5, certainly not in terms of Mosley launching a coup.

"If Max were planning anything nobody would know about it until the blood was on the floor," suggested one source chillingly.

Another was adamant that returning to his old role is "the last thing Max wants".

"Admittedly, he might be a little disappointed with the way it has gone so far," the source added, referring to Todt's first year as president, "but there is no plotting, there is no coup."

We understand that Mosley, who has not attended a single meeting of the Senate since standing down last year, will not be in Paris for the meeting next month.

"He still has a lot of friends in the FIA, including Todt, but his involvement is in the past," said a friend. "If he had wanted to continue, he would not have stood down. He is now engaged in an entirely different sphere and even moved back to the UK in order to be closer to the action.

"He and Todt are on excellent terms; they speak quite often and meet every now and then. But he doesn't seek to interfere.

"In his early days Max suffered slightly from Jean Marie Balestre, who used to haunt the corridors," revealed the source. "Apart from not wanting to subject Todt to that, Max has other fish to fry."

Another usually highly reliable source wasn't so much concerned by talk of the coup but who was behind the original story, suggesting that it appeared to be a deliberate plant.

"This same website carried a story during the election that the FIA had let Todt use its private jet to go to a meeting with the African clubs," said the source. "This was completely false and led to a number of media outlets, including Autosport, apologising. The truth was he went out Egypt Air and came back Kenya air (or maybe the other way round), and paid his own fare."