Jenson Button: "I've spent such a large part of my Formula 1 career working in Japan that I almost consider it something of a second home nowadays. Tokyo is one of the greatest cities in the world - just an endlessly exciting place to discover and explore, and Suzuka is the perfect venue for the Japanese Grand Prix - one of the world's truly great circuits, and a supreme challenge for any racing driver.

"I love the whole Suzuka experience - the fact that it's a real trek to reach from Europe, the amusement park that you walk through to get to the paddock, the incredibly loyal and friendly Japanese fans - who cheer me on all weekend - and the whole atmosphere, which is invariably extremely tense and frantic, because the race always plays such a decisive role in the outcome of world championships.

"I've had some great results at Suzuka, but I've never won in Japan. I think it's a circuit that suits my style - it's all about scrubbing off as little speed as possible through the corners and maintaining a very smooth and precise rhythm: get it wrong and you're usually scrabbling to regain your momentum for several more corners. It's a punishing place.

"I think the world championship is still completely open: obviously, there's no room for mistakes, but any of the top five drivers could easily steal the title. It might seem a disadvantage to be behind in the points standings, but, make no mistake, I know I can win this championship. I'm still as determined as ever to keep the number one on my car for 2011." 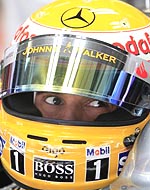 Lewis Hamilton: "The first two Japanese Grands Prix of my Formula 1 career were held at the Fuji Speedway. While that's a great circuit, on arrival at Suzuka for the first time last year, it was clear that this was one of the great racetracks of the world.

"It's a real driver's circuit - you need to be committed and precise to do well there, and there's no room for error either: no Tarmac run-off, and all the barriers are pretty close, so any mistake is going to hurt your chances big-time.

"It's also a place with a lot of history. Before I first went there, it was a place I always associated with Senna and Prost, and their incredible rivalry. But it only ever existed on the television screen - walking the track for the first time, and knowing I was standing on the same spot of Tarmac where two giants of the sport traded blows was an exciting experience.

"Suzuka is very much unfinished business for me. I raced the best I could last year, but our car just wasn't fast enough. This year, I'm holding nothing back - I need a strong result to get my title hopes back on track, and that will be my complete focus from the moment I first sit in the cockpit on Friday morning.

Martin Whitmarsh, Team Principal: "The bald facts show that we've only managed to get one car to the finish of each of the last four grands prix. While that doesn't make for positive reading, it's perhaps too stark an illustration of our overall competitiveness. And it certainly doesn't reflect the level of dedication and commitment that's come from every single team member.

"We have worked with unstinting focus and dedication throughout this whole season. And our current positions in both the drivers' and constructors' world championships are just the spur we need to raise our game and attack these final four races of the season with real vigour.

"Of course, any team would tell you that it deserves to have scored more points this season, but we've been unusually unfortunate recently. As an organisation, of course, we don't rely on luck - but I'm optimistic in thinking that our fortunes are due a change, and that we can all raise our game as we head into these final four races.

"Perhaps our recent misfortunes are exactly what's needed to strengthen our approach and further narrow our focus. We are on the attack: we know all about taking the fight to the end, and I know I can rely on every single individual within this organisation to make sure we're hitting with absolutely everything we have until the very end of the season."

To experience the Suzuka Circuit in more detail click here