Massa to test on Friday 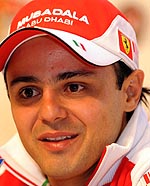 Ferrari has revealed that Felipe Massa will drive an F2008 at Barcelona on Friday, the same car in which he and Kimi Raikkonen won the 2008 Constructors' Championship.

The test - which is being run by Ferrari's F1 Clienti department - takes place after two days of testing dedicated to nine-time MotoGP world champion Valentino Rossi.

The F2008 can now be used following the end of a two-year embargo - due to new technology protection - and the test will see the Brazilian driving an F1 car in anger for the first time since his crash during qualifying for the Hungarian GP.

"As the car and the track were available I thought it would be helpful to go out onto the track for a day to continue gaining confidence," said Massa. "After the days in Fiorano and Mugello this will be a nice opportunity to get back driving on such an interesting and challenging track."