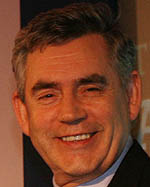 On inheriting the role from Tony Blair, prime minister Gordon Brown promised that much would change under his leadership. One of the first things to go, so we were promised, other than spin, would be the celebrity fixation at Number 10 Downing Street. Previously, it was common to see Blair and his wife hob-nobbing with stars of stage, TV screen and the pop world, the former PM even appearing in a couple of TV comedies and children's shows.

Sadly, under the dour Scot nothing has changed, and while the PM has yet to be present at the repatriation of one single soldier from two wars he and Blair went into under highly dubious circumstances, Brown is known to find the time to commiserate with losers in a number of reality TV programmes including the X Factor.

Putting that aside however, what should be of real concern to motor sport fans is the fact that the PM attended yesterday's British Racing Drivers' Club Awards gathering in London. Speaking at the event, Brown revealed a "life-long passion for motorsport" as he presented Jenson Button with the Richard Seaman Trophy.

It is not for nothing that Brown has gained something of a reputation as a Jonah, the prime minister appearing to jinx just about everything he comes in contact with.

For those with a short memory, here are a few example of Jonah Brown, courtesy of that icon of the political blogsphere, Guido Fawkes.

Be warned motor sport fans, the curse of the Jonah is upon us.