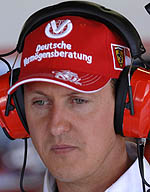 There is growing speculation that Michael Schumacher might make a sensational return to F1 with Mercedes, joining forces with Ross Brawn, the man with whom he won his seven titles.

The rumours linking Schumacher with a 2010 drive have been there for some time, fuelled by the planned return to the cockpit this year to replace Felipe Massa following his accident during qualifying for the Hungarian Grand Prix.

Then, in the wake of Mercedes buy-out of Brawn GP, speculation of a return continued to mount even though the German claims the neck injury which ended his hopes of replacing his former teammate during the summer looks set to jeopardise any hope of a return to the F1 cockpit.

The rumours are now growing in strength, and with neither Mercedes nor Schumacher making any public denials, many are wondering whether the German - the most successful driver in the history of the sport - might return to F1 with the company that financed his first F1 drive.

During his time in F1, it is known that Schumacher was approached by Mercedes Motorsport boss Norbert Haug on a number of occasions, the German keen to see the legendary driver in a McLaren-Mercedes.

Everyone is remaining tight-lipped at present, however, with a new order in F1, not to mention new teams and new regulations - regulations that would suit the 7-time champion - Schumacher might well be tempted back into the F1 cockpit, especially if it is at the wheel of a Silver Arrow.