Haug: We have a long term commitment to McLaren 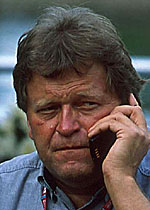 As speculation over the future of the relationship between Mercedes and McLaren continues, Norbert Haug insists the German manufacturer has a "long term commitment" to the Woking team.

Despite the fact that Mercedes owns a 40 percent share of the Woking team, there is mounting speculation that not only will the German manufacturer buy a stake in Brawn, which this season won both titles with Mercedes power-plants but didn't carry the iconic silver star on its cars, but also sell part or all of its shares in McLaren. Indeed, in recent weeks there has been talk of McLaren becoming a customer of the German manufacturer ahead of a move to build its own engines.

However, speaking in Abu Dhabi, ahead of today's race, Mercedes Motorsport was keen to play down the speculation, insisting that all is well between the two icons of motorsport who, at the European Grand Prix, celebrated the 250th race of their partnership, a partnership which, until that point, had netted 3 drivers' titles and one constructors', 59 wins, 62 poles and 68 fastest laps.

"There is a very firm decision that we have a long-term commitment to our partner McLaren," Haug told reporters. "Rather than going into speculation I have to point out that this team works better together than ever before. To discuss other issues and other options that probably are in the background and that are internally discussed is just not the right thing to do. The only decision that is taken is that we are firm, here, partners and are connected for a long period of time."

His comments come in the wake of meetings with both McLaren and Brawn which were attended by "high level officials" from Mercedes Stuttgart HQ.