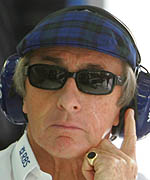 Three-time World Champion and former team owner Jackie Stewart claims he was called on to stand as FIA president at the forthcoming election but chose to decline.

While not revealing who asked him to stand - and most would think it unlikely to be Bernie Ecclestone or Max Mosley, who are both known to dislike the man - Stewart did say it was someone "high up".

With growing concern that Ari Vatanen might pull off a major shock next month, Stewart admits that the invitation to stand might have been a deliberate attempt to split the Finn's vote.

"That certainly occurred to me," Stewart told the Guardian. "Particularly to be asked at such a late date. If I had been thinking of standing, I would have done it much earlier. I've been asked over the years, and again in the last few weeks. I replied absolutely not, just as I had said before.

"My belief is that the president shouldn't be somebody who has been involved either recently or presently in Formula One," he continued, an obvious swipe at the other candidate, Jean Todt. "It needs more experience and knowledge of bigger things than F1 breeds in skills, and that's no disrespect to my colleagues.

"I don't think it can go along correctly without substantial change. Ari Vatanen is capable of doing it. If Jean Todt comes in with the infrastructure that has been put in place for him, then there is not going to be change, and that is not a good thing. Confidence among motor manufacturers needs to be rebuilt."

With Todt initially a shoe-in for the presidency, especially with the public backing of Mosley and the full weight of the (current) FIA spin machine behind him, few thought Vatanen stood much of a chance. The situation wasn't helped when Vatanen initially appeared to focus his efforts on the F1 team bosses rather than following Todt's example of travelling the globe to meet and greet the heads of the various member organizations, those that would actually do the voting. While F1 appears to be the public face of F1, it is the member organizations that give it its strength.

Sensing that things weren't going well, Vatanen has changed tack of late and consequently has been appearing stronger. However, the downside of this was apparent at the weekend when the Finn was refused a pass for the starting grid at the Italian GP, a major photo opportunity for any politician.

While media passes are the domain of the FIA, and given only to those who follow the party line and don't attempt to rock the boat, grid passes, like paddock passes, are given out by Bernie Ecclestone's Formula One Management.

Explaining why Vatanen was not allowed a pass, Ecclestone said: "I don't see any reason for him to be on the starting grid. He's not a sponsor, he's not a team owner. This is what happens, particularly at Monza. There were ten million politicians and their mothers who wanted to be on the starting grid, goodness only knows why, but they did. We have a limited number of passes which we had agreed to allocate. That was it."

There is also concern at the manner in which the 'crashgate' saga is being handled, with some seeing it as an attempt to undermine Vatanen's campaign, what with the timing of some of the statements (and leaks) suspiciously conflicting with the Finn's own announcements.