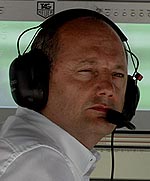 A legal case against McLaren boss Ron Dennis and three of his companies was dropped today.

The claimant, Peter Boland, who was employed as a steward on Dennis's aeroplane, between 2002 and 2007, read the following statement at a Southampton tribunal today:

I have decided to withdraw my action against Mr Dennis and all respondents in the case.

I unreservedly apologise to Mr Dennis and all respondents, and to the Southampton Employment Tribunal, for wasting their time with what I now realise were unfounded allegations.

In particular, I apologise to Mr Dennis for suggesting that he is, or was, either racist or homophobic, or that he ever made any remarks or performed any actions that would suggest that he was.

I feel great remorse for the upset that I now realise I have needlessly caused to him, to his family and to his colleagues.

Lastly, I will return the car, which was the subject of county court proceedings.

I consider this matter now closed and will not be taking further action, or making further comments, in connection with it in the future.

Reacting to the case dismissal after Boland withdrew his complaint, Ron Dennis said:

Clearly, I and all at McLaren, and all the other respondents, have been totally vindicated by the complete and unequivocal withdrawal and unreserved apology by Peter Boland, who had worked as a steward on my aeroplane between 2002 and 2007.

This case has been hurtful, irritating and unnecessary, in the sense that no impropriety ever took place, which fact Mr Boland now concedes.

Equally, Mr Boland accepts that I have never said or done anything either racist or homophobic.

Moreover, every action taken by my colleagues and me in connection with Mr Boland's dismissal was done with the intention of minimising the negative impact of that dismissal on his reputation and employment record.

Had he not embarked on this unsuccessful and injudicious legal action, which he has anyway now abandoned, those goals could have been achieved.