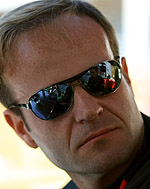 From comments made over the weekend in Florianopolis, where he was competing in - and winning - the Felipe Massa Kart Challenge, it would appear that Rubens Barrichello is not entirely clear about his future with Honda.

While there has been talk in the paddock for some time that the Brazilian was no longer part of the Brackley outfit's plans, with some expecting an official announcement over the course of the Japanese GP weekend, publicly, at least, the veteran racer still holds out hope, no matter how slim.

At Barcelona last month, the team ran Lucas di Grassi and Bruno Senna, having previously failed to woo Fernando Alonso. However, Barrichello claims that he is still holding out hope of receiving a call to take part in the forthcoming test at Jerez, however that seems unlikely.

While the Brazilian has been linked with Force India and Toro Rosso, his only real F1 hope - such as it is - appears to be with Honda, though the serious money has him heading to America and the Indy Racing League.

However, the fact is, that if Rubens is being 100 percent honest with us and is still holding out hope of a Honda drive in 2009 it hardly shows the Brackley team in a good light.

Furthermore, with the Brazilian having had the better of Jenson Button in 2008, the Englishman would do well to pay attention and learn from the way his (former) teammate is being treated.

It would appear that Rubens, who earlier this year became the most experienced driver in F1 history, has been listening to Honda's advertising guff for too long and dreaming the impossible dream.