di Grassi to test for Honda 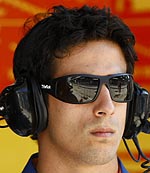 Renault test driver Lucas Di Grassi is to test with Honda in Barcelona later this month.

The Brazilian driver will join the Honda team at the Circuit de Catalunya for the first test of the winter from Monday 17 to Wednesday 19 November. Lucas will spend all three days with the team, commencing with a part-day familiarisation programme and culminating in a full day of testing in this year's RA108 race car.

Lucas, 24, has three seasons of experience in GP2, finishing second in 2007 and third in 2008 despite missing the first three rounds. He has been the Renault's third driver for the 2008 season and part of their Driver Development Programme since 2004.

Ross Brawn, Team Principal of the Honda Racing F1 Team, said: "We are delighted to provide Lucas with a test with the Honda Racing F1 Team later this month. This is a very well-deserved opportunity for Lucas to prove his potential after such an impressive performance in GP2 this season and during his testing responsibilities with the ING Renault F1 Team. We look forward to seeing Lucas in action and will take a keen interest in how he performs."

Lucas Di Grassi commented; "I am very excited to have the opportunity of testing with the Honda Racing F1 Team in Barcelona and look forward to proving myself to the team. I would like to say thank you to the ING Renault F1 Team for all their support and for allowing me this opportunity to help further my career. The next two weeks will be a very important stage in my development and I will be spending a lot of time at the Honda Racing F1 Team's factory before the test to speak with the engineers and learn as much as possible in advance of the test."